Cadbury Dairy Milk, through its new campaign, is encouraging people to unite against cyberbullying and lend support to a friend by posting a purple heart when they come across a troll or a negative comment on social media platforms. 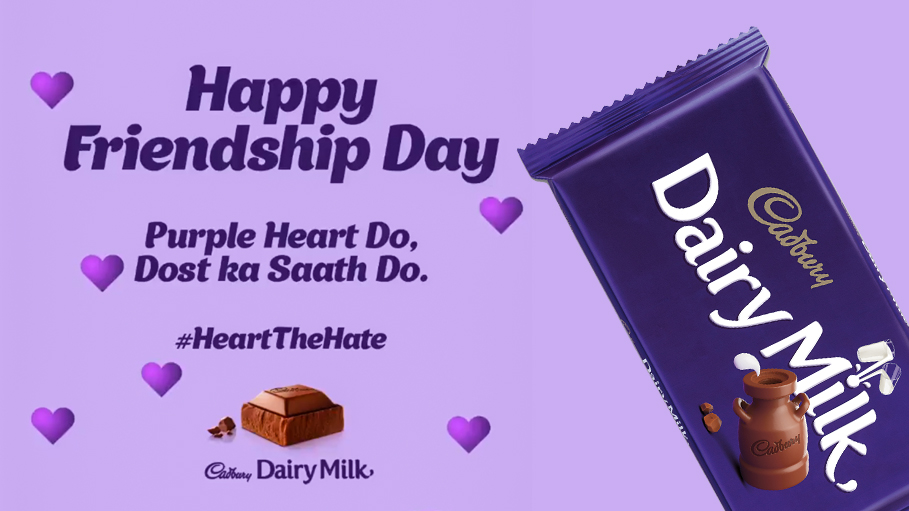 Increasingly, cyberbullying is becoming a norm, which is a worrying trend across the world. And as per an international survey by Ipsos in 2018, the problem is particularly bad in India, which showed the highest rate of parents confirming instances of cyberbullying. According to the study, 37 percent of Indian parents admitted that their child was bullied online, especially on social media, with approximately 14% of them reporting that the bullying occurred regularly.

However, it just takes one person to stand up against such bullies. When that one person stands up, it encourages significant support from others as well.

Cadbury Dairy Milk, through its new campaign, is encouraging people to unite against cyberbullying and lend support to a friend by posting a purple heart when they come across a troll or a negative comment on social media platforms. The #HeartTheHate campaign is in line with the company’s objective to continue fostering love for Cadbury Dairy Milk by strengthening its generosity narrative.

Commenting on the launch of this unique campaign, Anil Viswanathan, Director – Marketing (Chocolates), Mondelez India, said that Cadbury Dairy Milk as a brand, believes that if there’s one thing that can shine a beam of light through the cracks in an increasingly divided world – is Generosity. A little bit of generosity can go a long way and often it’s the smallest things that have the biggest impact. Cyber-bullying is something which affects everyone especially young people as they feel isolated and depressed when they are exposed to it. The #Heartthehate Campaign builds on a very simple insight that when friends post something as simple as a purple heart in response to the trolls, young people feel less isolated and hence the impact of online bullying is reduced. This campaign is another small step to create a big impact on social issues, he said.

Conceptualized by Ogilvy India and Facebook, the campaign is based on the idea of friends standing up for each other and expressing solidarity with victims by replying with the ‘Purple Heart’ emoticon in response to every troll comment on the victim’s timeline, along with the hashtag #HeartTheHate. This ‘Purple Heart’ emoticon is present on every keypad in the world making it easy for everyone to use it and be a part of this movement. The idea is to give people a visual device (the Purple Heart) to express their support for the people getting bullied thus resulting in an outpouring of positive emotions and support overriding the negativity created by the abuse of online bullying.

Commenting on the campaign, Prakash Nair, Executive Vice President, Ogilvy India said that today while online/social media has become the youth's hangout place, it is also a place where they face a lot of harassment and bullying. Cadbury Dairy Milk, with its proposition of Kuch Achha Ho Jaaye, Kuch Meetha Ho Jaaye, decided to act on this by arming the youth with a simple weapon to silence the bully - a purple heart emoji. Whenever a friend is getting trolled, all they must do is troll the troller with a purple heart. This simple, generous act of posting a purple heart can help drown out hate comments. Even if one bully is drowned by the purple heart, it will be a worthwhile initiative.

Siddharth Banerjee, Director, Global Sales Organisation, Facebook India said that they believe the Purple Heart campaign is a great initiative by Mondelez India to champion social good in India. Using the Purple Heart, an easily accessible emoji, is a very visual and native idea for the youth. Facebook is very proud to partner with Mondelez India and Ogilvy in bringing this cause to life, he said.

The campaign will be supported with a digital film, along with an integrated multi-media marketing campaign, which will include influencers engagements and on-ground activations and is being executed with the help of Wavemaker India.