China risks a "tsunami" of coronavirus infections resulting in 1.6 million deaths if the government abandons its long-held Covid Zero policy and allows the highly-infectious omicron variant to spread unchecked, according to researchers at Shanghai's Fudan University. 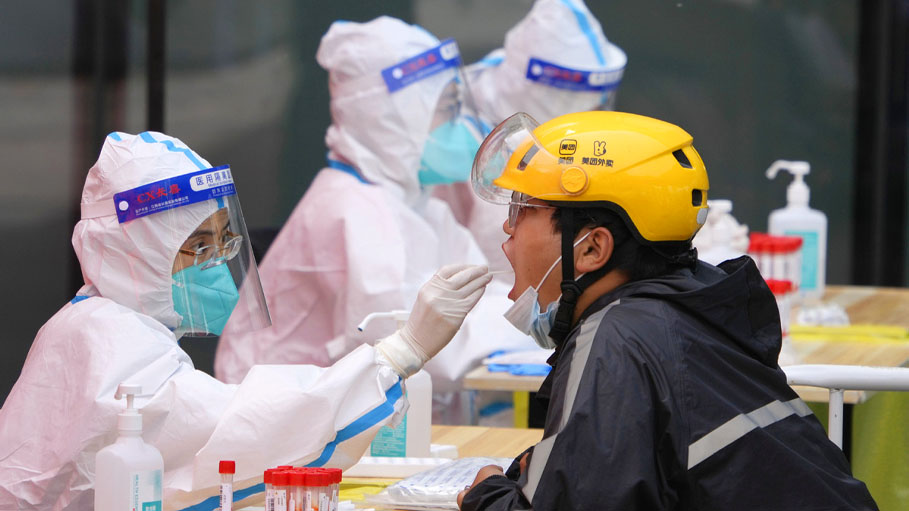 China risks a "tsunami" of coronavirus infections resulting in 1.6 million deaths if the government abandons its long-held Covid Zero policy and allows the highly-infectious omicron variant to spread unchecked, according to researchers at Shanghai's Fudan University.

The peer-reviewed study, published in the journal Nature, found that the level of immunity induced by China's March vaccination campaign would be "insufficient" to prevent an omicron wave that would swamp intensive care capacity, given low vaccine rates among the elderly and the nation's reliance on less effective, domestic shots.

Without restrictions such as the country's mass-testing drives and strict lockdowns, the spread of omicron could lead to 112.2 million symptomatic cases, 5.1 million hospital admissions and 1.6 million deaths, with the major wave occurring between May and July, the study said.

Shanghai reported 1,487 new infections for Tuesday, down from 3,014 on Monday. No cases were found outside quarantine. Authorities have indicated they need to see three consecutive days of no community spread before they start easing curbs that have kept millions of people inside their homes for more than a month. Beijing reported 37 cases for Tuesday, down from 74 on Monday.

"We don't think that it is sustainable, considering the behavior of the virus now and what we anticipate in the future," Tedros said in a briefing on Tuesday, adding that a "shift would be very important."

Tedros's comments mark a rare instance of the WHO chief challenging a member state's domestic Covid policies. Early in the pandemic, he faced criticism that he was too deferential to China, where the virus first emerged.

President Xi Jinping has clung to China's tough Covid strategy, tightening pandemic restrictions in Shanghai and expanding a mass testing sweep in Beijing. Officials are chasing the elusive goal of wiping out Covid-19 cases in the community despite a growing cost to the economy and as much of the rest of the world opens up.

Experts don't expect China to start meaningfully shifting away from Covid Zero until Xi secures a record third term as the nation's top leader at the Communist Party's national congress expected later this year. Xi and the Party have made much political capital out of the contrast between China's controlled, low-deaths approach and that of the US, which has the world's highest fatality tally.

The strategy -- which relies on a playbook of border curbs, mandatory quarantines and repeated mass testing to root out all chains of transmission -- is leaving the country isolated as the rest of the world normalizes and lives alongside Covid. The increasingly tough measures required to eliminate outbreaks of more contagious strains are also hitting the world's second-largest economy, with analysts saying it is unlikely to hit an annual growth target for this year.

SEE ALSO:
99 of 100 Cities at High Risk Environmentally in Asia

Luxury Carmaker Ferrari to Recall More Than 2,200 Cars in China over Brake Risk

Apple Ex-Employees Accused of Theft Will Fly to China