Argentina street artist Andres Petreselli, who made the mural, says the portrait of the 16-year-old Thunberg was unusual because she typically does not address politics, religion or sports. 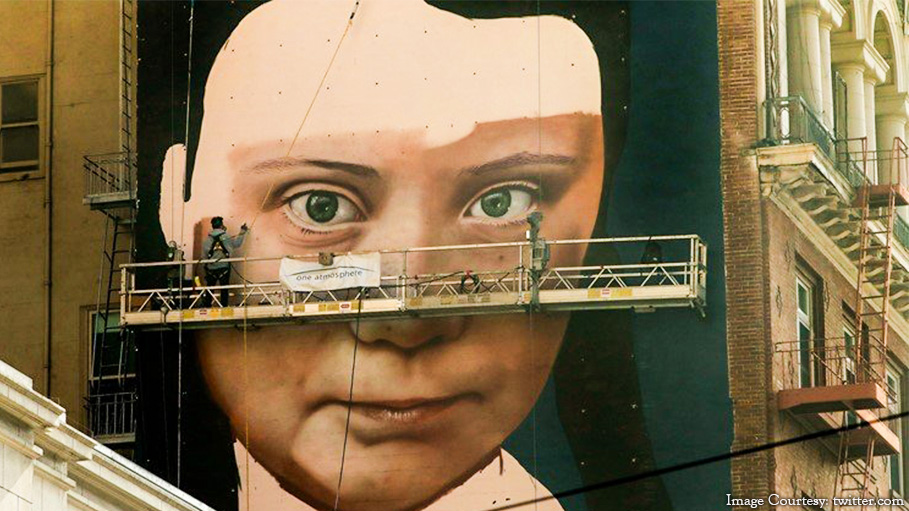 Climate Activist Greta Thunberg is now busy with her climate change activism across America, meanwhile a massive portrait of her is gazing down onto the citizens of San Francisco has been unveiled since recently, in a bid to remind the residents about the dangers posed by the climate change.

The 60-foot tall and 30-foot wide mural of the teen activist was revealed hours after Greta Thunberg announced on a Twitter post that she would be leaving the United States by boat on Wednesday to participate in the United Nations climate change conference in Madrid in the month of December. The teenager never travels on air because of its high levels of the greenhouse gas emissions.

Argentina street artist Andres Petreselli, who made the mural, says the portrait of the 16-year-old Thunberg was unusual because she typically does not address politics, religion or sports. “But, this one is I feel connected with the politics behind (it) because I think it is real and if I have to compare it with the rest of my murals, this is the most political one that I ever made”.

The 32-year-old artist who previously painted a mural of the late actor Robin Williams in San Francisco also said he hopes that the passers-by would be touched by the image of Greta Thunberg, who has mobilized a global youth movement against climate change.

Paul Scott, the executive director of OneAtmosphere.org, a non profit based in San Francisco who has funded the work said, “We are really just hoping that it stops and makes them think, that this will amplify Greta’s message, that people will start to understand the clear call for action that she is sending out”.

Thunberg has for the last three months is traveling in North America after arriving in New York City by boat on 28th August, where she arrived to deliver a speech at a United Nations climate summit in September.

On Tuesday Greta in a Twitter post said she would set sail from Virginia in the morning of Wednesday on a 48-foot catamaran. The owners of the catamaran have offered her a ride across the Atlantic Ocean.

Greta Thunberg came to the be known for her climate change movement since August 2018, when she started to sit outside the Parliament of Sweden every Friday, holding a sign that read, “School Strike for Climate”.