Giving rise to all the controversies and over a pile of burning shoes, Nike is having Colin Kaepernick to be the face of its ‘Just Do It’ ad campaign, turning 30. 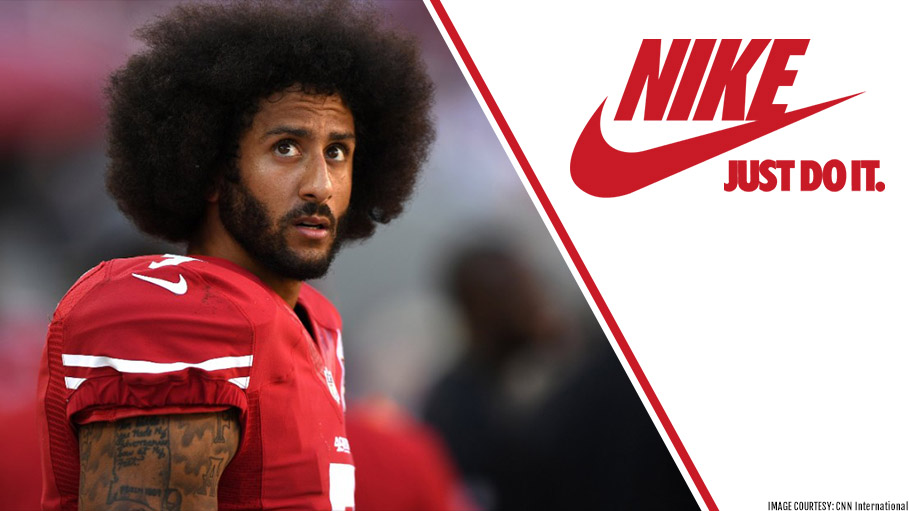 30 long years of ‘just doing it’, 30 long years of empowerment, comfort, and of course, sportsmanship, are breaking and burning the internet all the way at the moment! As American football quarterback Colin Kaepernick is being buzzed in to become Nike’s ‘Just Do It’ campaign face. And that too on the campaign’s 30th anniversary celebration.

Colin Kaepernick, along with a close up snap, put this up on Twitter, around Monday midnight: “Believe in something, even if it means sacrificing everything. #JustDoIt”.

Believe in something, even if it means sacrificing everything. #JustDoIt pic.twitter.com/SRWkMIDdaO

Currently a free agent, Kaepernick gained huge media attention and became a center of dissension in 2016, when he refused to stand for the US national anthem at the NFL games showing protest against racial injustice.

Kaepernick, who belongs to mixed race himself started his college career at Nevada. After his controversial behavior at the NFL, the 30-year-old footballer pledged to donate money to “organizations working in oppressed communities” and was also chosen as the “Citizen of the Year” by GQ Magazine for his efforts, in 2017.

Although the NFL protest act churned out mixed reactions from the mass, this recent ad campaign venture is picking up mostly negative responses and also catching a firestorm.

A number of Nike users are clearly not happy, in fact, enraged by the decision. And they are not backing off from showing their disagreement and aggravation by burning Nike products, especially shoes.

A lot of such videos have been going viral lately, this one snap is a proof, how much people are opposing the decision.

In fact, people have termed this anti-campaign as ‘#JustBurnIt’ that blatantly mocks the original punchline.

People are simply running out of clue that how the sports apparel bigwig could sign Colin Kaepernick, the former 49ers for such a successful ad campaign, who has not played for the NFL since last 2 years!

Darren Rovell, the ESPN Sports Business Reporter and ABC News Business Contributor broke the news on Twitter adding, “BREAKING: Nike had been paying Colin Kaepernick all along, waiting for the right moment. That moment is now, as he becomes the face of the company’s 30th anniversary of the “Just Do It” campaign.”

BREAKING: Nike had been paying Colin Kaepernick all along, waiting for the right moment. That moment is now, as he becomes the face of the company’s 30th anniversary of the “Just Do It” campaign. pic.twitter.com/uccpDStbq5

Rovell also initiated a poll on his Twitter handle to get a hint of the public mindset towards Nike’s new campaign strategy. It appeared from the poll that 29% of them are more likely to buy Nike products following the campaign, 21% are less likely and for the rest 50% it doesn’t affect their decisions.

However, the announcement of Kaepernick joining the new ad campaign venture, is somehow or the other is ‘just doing’ the job what it was meant for. Following the thumb rule of advertising that ‘every publicity is good publicity’ Nike is undoubtedly catching all the market hype, but would they mind the fire? Remains to be seen!