Volodymyr Zelensky, who also played the President in a popular TV show, has crushed incumbent President Petro Poroshenko by more than 73 percent of the vote thus registering a landslide victory in the political history of Ukraine. 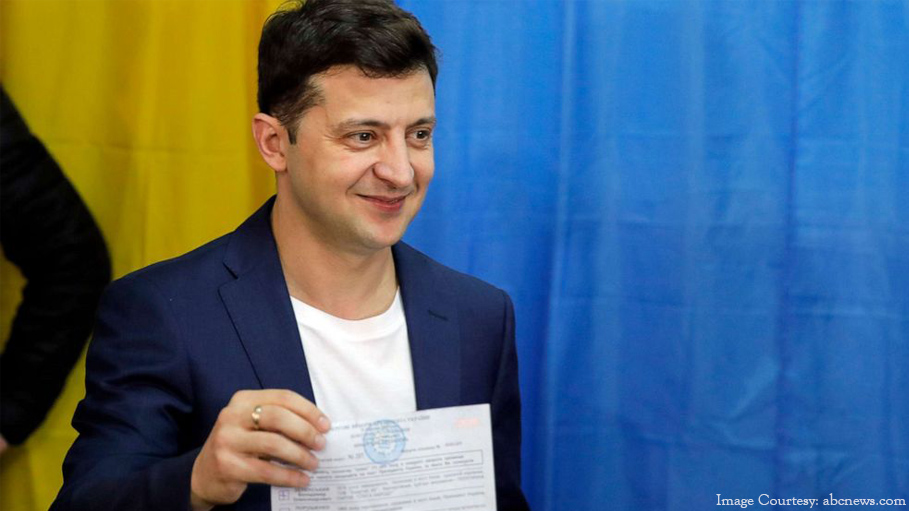 A comedian with no political experience has registered a landslide victory in the Presidential election of Ukraine. Comedian Volodymyr Zelensky, who started by rebuking country’s political establishment by his acts of comedy, is now the new leader of the country.

Volodymyr Zelensky, who also played the President in a popular TV show, has crushed incumbent President Petro Poroshenko by more than 73 percent of the vote thus registering a landslide victory in the political history of Ukraine.

53-year-old Poroshenko has achieved 24 percent of the total votes thereby losing himself to the 41-year-old comedian and actor across the country. The result is an extraordinary outcome of a campaign that started as a joke but struck a chord with voters, who are frustrated by the social injustice and corruption rampant in the country.

The star of the comedy TV series “Servant of the People” will now take over the reign of a country of 45 million people confronting the challenges and prove him worthy. After the results, Zelensky told his jubilant supporters, “I will never let you down. I can tell all post-Soviet countries: ‘Look at us! Everything is possible!’” he declared.

The remark of Zelensky appeared to be aimed at neighbouring Russia, where Vladimir Putin is in power for more than 20 years and many followed the election of Ukraine with keen interest.

Congratulations started pouring in from the world leaders, foremost among them are French President Emmanuel Macron and Poland’s Andrzej Duda, who congratulated the President-elect over the phone. British foreign minister Jeremy Hunt also wrote on Twitter, “You will now truly be the Servant of the People”, pledging London’s support.

Also, President of European Council Donald Tusk and NATO Secretary General Jens Stoltenberg have said, they are looking forward to continuing support and cooperation. The US embassy in Ukraine also said on Twitter, “We congratulate President-elect Volodymyr Zelensky”.

The outgoing President Petro Poroshenko has said in his outgoing speech from campaign headquarters that the result is an indication to “call my opponent and congratulate him. I will leave office but I want to firmly stress I will not quit politics”.

The outgoing leadership came to power after a pro-western uprising ousted a Kremlin-backed regime in the year 2014, triggering Moscow’s annexation of Crimea. Poroshenko supporters credited him with rebuilding the army of Ukraine and securing an Orthodox Church away from Russia.

But many feel that after coming to power the ruling elites have forgotten their promises of the revolution thereby making way for the Comedian, who shunned traditional campaign rallies instead performed comedy gigs using social media to appeal to voters.