England is hosting the World Cup 2019, which will be contested in a round-robin format this time. The game that is beginning on Thursday with the host England will take on South Africa at Kennington Oval, London. 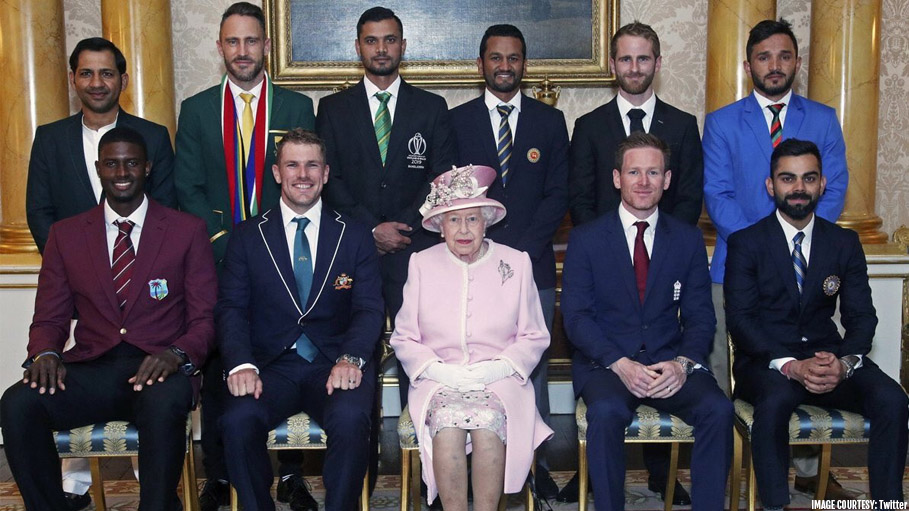 Cricket captains of the participating countries of the world cup 2019 met Britain’s Queen Elizabeth II and Prince Harry, Duke of Sussex, ahead of the World Cup 2019 opening party at The Mall near Buckingham Palace in central London.

Virat Kohli is going to lead India in a 50-over World Cup for the first time also met the Queen in person along with England’s Eoin Morgan.

Later the Royal Family said in a tweet along with a picture of Queen Elizabeth with captain Virat Kohli and England's Eoin Morgan, “Captains including @Eoin16 and @imVkohli met Her Majesty and His Royal Highness before joining a Garden Party at Buckingham Palace”.

England is hosting the World Cup 2019, which will be contested in a round-robin format this time. The game that is beginning on Thursday with the host England will take on South Africa at Kennington Oval, London.

After suffering a first-round exit in World Cup 2015 in Australia and New Zealand, Team England has made a tremendous improvement in the last few years and shown the world how much the team is capable.

In an ICC event recently, ahead of the World Cup, England has climbed to the top of the One-day International (ODI) rankings, while scoring record highest ODI total twice, which now stands at 481 for six.

The basis of England’s ODI rejuvenation has been its batting line with excellent batsmen like Jason Roy, Joe Root, Jonny Bairstow, Morgan and the dynamic Jos Buttler, are among the top seven who can individually change the course of any innings in the blink of an eye with their firing batting skills.

Ahead of the first match of the World Cup, as he prepares to lead his team in their tournament opener against South Africa, England captain Eoin Morgan said that winning a home World Cup could do wonders as it is the game’s birthplace.

Morgan said, “It would mean a huge amount. The World Cup alone raises the profile of the game and is a platform for every young kid in this country to have a hero or have the inspiration to pick up a ball or a bat”. He also added, “To go on and win it, I couldn’t imagine what that would do”.

Its a strange irony that the game of cricket, which originated in England and has gradually become the symbol of England’s imperial rule, now the team has to struggle hard to secure a place at the hands of many of its historic colonies.