Hours before on Friday, US President Donald Trump declared that he had received a ‘very beautiful letter’ from North Korean leader Kim Jong-un and declared that he could have another meeting with Kim very soon. 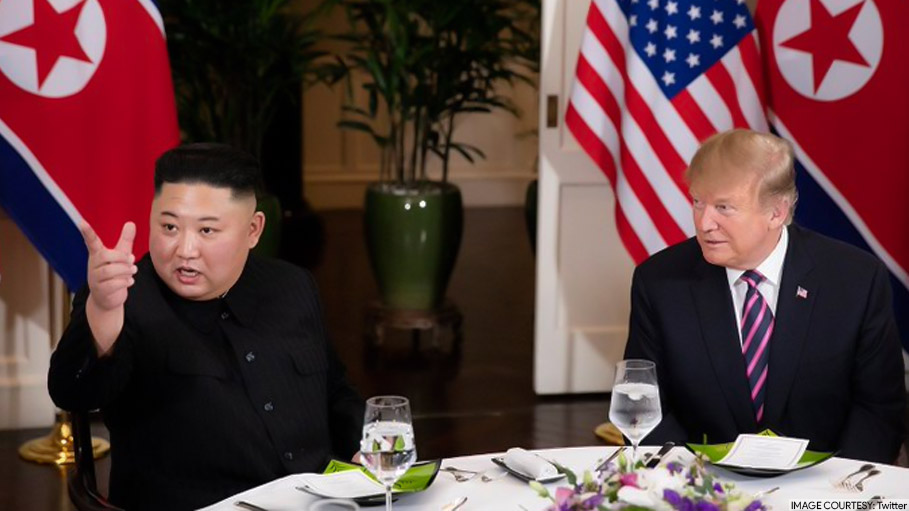 Moments after US President Donald Trump receives a ‘very beautiful letter’ from North Korean leader Kim Jong-un with an indication of another meeting, North Korea fires two ‘unidentified projectiles’ into the East Sea, thereby taking the matter from hope to despair.

According to the South Korean military, the projectiles were fired from the northeastern city of Hamhung into the East Sea, which is also known as the Sea of Japan. This is latest in a series of such launches by North Korea.

South Korean news agency Yonhap reported that the country’s Joint Chiefs of Staff has said, “The military is monitoring the situation in case of additional launches while maintaining a readiness posture”.

Meanwhile, hours before on Friday, US President Donald Trump declared that he had received a ‘very beautiful letter’ from North Korean leader Kim Jong-un and declared that he could have another meeting with Kim very soon.

Speaking to media, Trump though did not say when such a meeting would take place. North Korea continues to test missiles despite a meeting between Trump and Kim on June 30, at which the two leaders agreed to revive the working-level talks, which are yet to resume.

Trump also informed that the letter was hand-delivered, but did not reveal who delivered it. He said, “It was a very positive letter. I think we’ll have another meeting. He really wrote a beautiful, three-page - I mean great from top to bottom - a really beautiful letter”.

Since last year, Donald Trump and Kim Jong-un, have met three times to discuss ways to resolve the crisis over North Korea’s nuclear and missile programs, but progress has been very low and the aim of United States to convince the North Korea leader to give up his weapon program didn’t work yet.

The recent missile tests by North Korean raised questions about the future of dialogue. Trump is keen to highlight his North Korea policy as a success ahead of his 2020 reelection bid, is now playing them down.

In earlier occasions, Pyongyang has also indicated a possible end to its freeze of nuclear and long-range missile tests in place since 2017, which Donald Trump has repeatedly pointed to as evidence of the success of his more than a year of engagement with Kim.

North Korea now has complained that the US and South Korea military exercise violates the pledge by Trump to Kim. At their first meeting in Singapore in June last year, Donald Trump also has pledged a suspension of major military exercises with South Korea.

US Secretary of State Mike Pompeo has recently said that he was hopeful that talks would resume with North Korea very soon and that the US side is planning for negotiations in a couple of weeks.

Inspite of tensions and lack of progress, Trump and Kim have avoided direct criticism of each other and have exchanged periodic letters in between their summit meetings. While Trump has always hailed his personal relationship with Kim, critics say the US President’s non-serious approach has allowed North Korea further time to develop its weapons programs with little tangible gain for the United States.