Dusting the Atmosphere with ‘Salt’ to Tackle Global Warming

A climate scientist has suggested that sprinkling salt into the sky can slow down global warming. 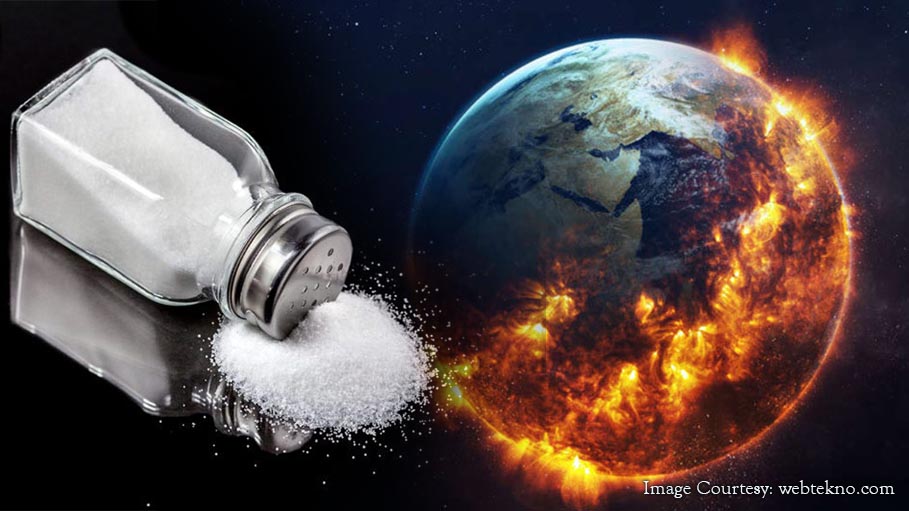 It may sound like a crazy idea but a climate scientist has suggested that sprinkling salt into the sky can slow down global warming. The idea came up when Dr. Robert Nelson, suggested that the salt would reflect more of the sun’s rays back into space thereby tackling global warming at some length.

According to the senior researcher at the US Planetary Science Institute, Dr. Robert Nelson, the theory involve dusting the atmosphere 11 miles above the Earth’s surface with a fine layer of table salt. As sodium chloride or table salt is safe and readily available and would not have negative effects on the weather.

Dr. Robert Nelson said at the Scientific Conference held in Texas recently, ‘‘we note the serious concerns regarding potential unintended consequences associated with geo-engineering concepts. While the results of our research are very promising, we are at the beginning of the research and additional work needed to understand the extent to which its hypothesized effect in the atmosphere can actually be realised.”

So far the most challenging part was finding a substance that would be both cheap and safe enough. Aluminum oxide for example could cause serious respiratory diseases such as black lung if it fell back to the ground, while sulphur dioxide carries a risk of acid rain. It occurred to Dr. Nelson that one of the most reflective and easily available substances he could get his hands on would be sodium chloride, or ordinary table salt.

Sprinkling tiny crystals of the compound into the upper troposphere the layer below the stratosphere would be a fairly easy way to make the atmosphere whiter while keeping the chemical a long distance away from most weather systems.

Some scientists though have suggested that such a technology could be used to reduce temperatures. But others have suggested that when the Solar Radiation Management (SRM) was withdrawn, it could lead to rapid global warming in a phenomenon known as ‘termination shock’.

As the planet is on average 1.2C hotter than it was before the industrial revolution. It is very much needed to check and slow down the global warming at this stage.

Earlier many ideas for slowing the pace of global warming were devised by many scientists, which included filling the oceans with iron filings, flying a giant mirror into space and lofting ice-spraying gondolas into the stratosphere on balloons. There were suggestions from experts also to have a giant helium balloon the size of Wembley Stadium, which could pump droplets of sulphates and aerosol particles into the stratosphere.

The notion behind many proposals for “geo-engineering” our planet to slow its rising temperatures is that it would be relatively simple to make the Earth reflect more of the Sun’s rays.

Though some scientists are of the view that artificially cooling the Earth to counter global warming may destroy this planet if the process is abruptly stopped. Like, Matthew Watson, a volcanologist and geo-engineering expert at the University of Bristol, said that salt came with its own problems. The chlorine, for example, could break up the ozone layer much like chlorofluorocarbons used to before they were banned by an international treaty. It is also possible that salt could warp the formation of the highest clouds.

Dr. Robert Nelson said the idea had come into his mind, while he was studying and researching on Ceres, which is the largest object in the asteroid belt. It was then Nelson realized that he could create similar white blotches on Earth using sodium chloride, or ordinary table salt.  Thereby sprinkling the white blotches made of table salt into the upper troposphere would make the atmosphere whiter and would not negatively affect weather systems.

Dr. Nelson has now proposed testing the hypothesis in an experiment above an area, which is expected to be badly affected by climate change, and that is forecast to go through severe temperatures as a result of climate change. However, a UN report revealed earlier this month that, spraying particles high above the Earth as a way to slow global warming might not be feasible. Even if the tests were successful, this would be a palliative, not a final solution.