The bride and groom were dressed in white. ‘The Rock’, 47, wore a white pair of jeans teamed with a white linen shirt while the bride adorned a flowery embroidered dress with a plunging neckline. 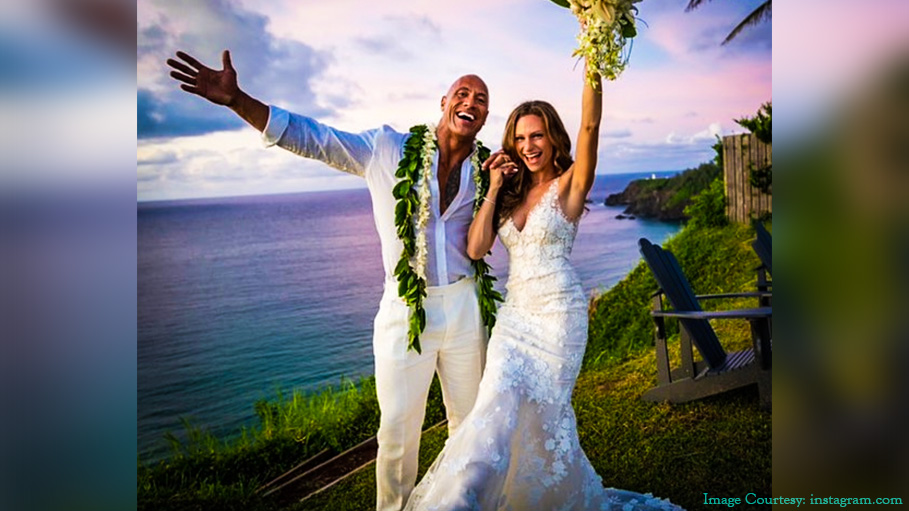 Dwayne Johnson and his longtime girlfriend Lauren Hashian have finally tied the knot in Hawai after dating for 12 long years. The good news was shared on Johnson’s social media profile coupled with several beautiful photographs from the secret ceremony.

The bride and groom were dressed in white. ‘The Rock’, 47, wore a white pair of jeans teamed with a white linen shirt while the bride adorned a flowery embroidered dress with a plunging neckline.

For those who are eager to know more about the bride’s background, Lauren Hashian is a singer and songwriter by profession. She released a song with Naz Tokio titled ‘Samson’ in the year 2018. She’s the daughter of drummer Sib Hashian from the famous 70s rock band- ‘Boston.’

Dwayne and Lauren met in Boston in 2006 where Dwayne was filming his movie ‘The Game Plan.’ The couple, however, began dating in 2007. They have two girls Jasmine, 3, and Tiana 1.

The couple is well known to keep their relationship private and very rarely have they been pictured together in public. They’ve only made four red carpet appearances together.

Speaking about his relationship with Lauren, Dwayne expressed that they have the greatest relationship as they make each other laugh. Lauren is also known to be laidback and allows him to enjoy the spotlight alone. When it comes to spending time with his former wife and eldest daughter from his first marriage, Lauren gives him all the space. Evidently, laughter and a lot of space is the key to their happy relationship.

Lauren stood by her long term partner through thick and thin. Dwayne admitted that Hashian was the one who pulled him out of depression after his divorce from his former wife Dany Garcia. She was there by his side all the way. With her dedication and support, he was soon back to his normal self.

It thus doesn’t come as a surprise that these two genuinely good people ended up together. We wish the newlyweds an awesome journey in the years to follow.