Economic Loss Due to Pakistan Floods Rises to around $18 Billion

Pakistan Floods: Some 37 per cent population was hit by poverty after floods in 118 districts, as estimated by the Pakistan government. 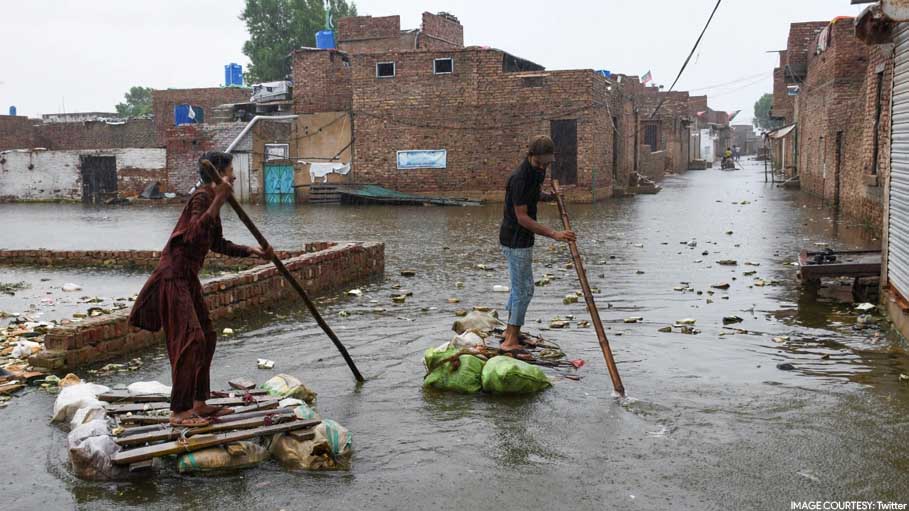 Islamabad: The estimated economic loss due to the unprecedented floods in Pakistan has neared around USD 18 billion, an increase from USD 12.5 billion estimated earlier, as calculated by the Centre and endorsed by the provinces.

Agriculture growth faced a much more severe impact in the aftermath of floods. The catastrophic floods have destroyed crops in 8.25 million acres as compared to the initial assessment of 4.2 million acres which has further increased the economic losses, reported The News International.

Cotton, rice, and minor crops have been damaged severely and if dewatering is not done properly, it can cause serious problems for wheat sowing. The cotton crop has evaporated in most parts of the country and now wheat sowing is under threat.

The Ministry of National Food Security has been assigned to come up with a summary to increase the minimum support price of wheat for the coming crop.

The authorities have held meetings with international donors and assured them that Pakistan would place an effective monitoring and evaluation system to utilise each and every penny to mitigate the flood losses in a transparent manner, reported The News International.

In the wake of the increased economic losses and reduced GDP growth, the per capita income is projected to slow down. The government had envisaged a GDP growth rate of 5 per cent for the current fiscal year.

Moreover, poverty and unemployment will go up manifold from 21.9 per cent to over 36 per cent. Some 37 per cent population was hit by poverty after floods in 118 districts, as estimated by the Pakistan government.

A high-profile committee with representation from the Ministry of Finance, Ministry of Planning, State Bank of Pakistan, FBR, PIDE and others evaluated that poverty and unemployment have gone up manifold, rising from 21.9 per cent to over 36 per cent.

The UN Secretary-General Antonio Guterres on Friday landed in Pakistan on a two-day visit to take stock of the floods-related situation and express solidarity with the country's people hit by extreme monsoon rain.

The UN chief will have meetings with the Pakistani leadership and senior officials to exchange views on the national and global response to this catastrophe caused by climate change, an official statement read.

Guterres will travel to areas most impacted by the climate catastrophe in Pakistan. He will interact with displaced families and first responders in the field, and oversee the UN's humanitarian response work in support of the Government's rescue and relief efforts for millions of affected people.

Meanwhile, as Pakistan struggles with the unprecedented floods, World Health Organisation (WHO) has also warned about the worsening crisis in the country ravaged by the record rains.

"We are following closely and with deep concern the humanitarian crisis currently facing the people of Pakistan as a result of devastating monsoon floods," said Dr Ahmed Al-Mandhari, WHO Regional Director for the Eastern Mediterranean, on the floods in Pakistan.

In a press statement issued on September 5, Dr Al-Mandhari said the current scale of damage and destruction due to the floods is like none seen before in Pakistan - a result of long-term global climate change leading to more severe weather conditions.

According to the World Meteorological Organization (WMO), Pakistan is facing one of the worst flooding events in its history.

The government estimates that millions across the country are affected by the rains, floods and impacts such as landslides, destroying infrastructure, homes, agricultural land and livestock. The calamitous floods have so far claimed at least 1,325 people in Pakistan.

The human and socio-economic toll is expected to increase as flood levels continue to rise, with immense pressure on the country's dams.

The Pakistan Meteorological Department said that it was the wettest August since records began in 1961. National rainfall was 243 per cent above average. In the province of Balochistan, it was +590 per cent and in Sindh +726 per cent, according to the monthly report.