"FINISH LINE!!! I did it!" O’Brady wrote on Instagram with a photograph, from the edge of the Ross Ice Shelf, which also marked the end of his trip. 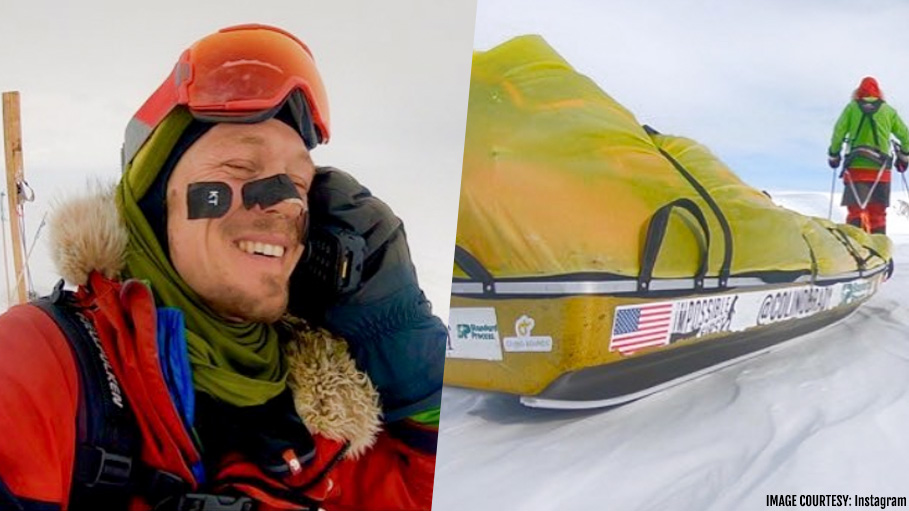 Endurance athlete from the United States, Colin O’Brady became the first person in the world to cross Antarctica without any help after 54 days of traversing through the barren, frigid continent. In what could be one of the great feats in the polar history, 33-year-old Colin O’Brady, covered the last 77.54 miles of his 921-mile journey across Antarctica in one final sleepless continuous 32 hours push, thus becoming the first person ever to traverse Antarctica from coast to coast solo, unaided and unsupported.

"FINISH LINE!!! I did it!" O’Brady wrote on Instagram with a photograph, from the edge of the Ross Ice Shelf, which also marked the end of his trip. He further wrote, “As I pulled my sled over this invisible line, I accomplished my goal: to become the first person in history to traverse the continent of Antarctica coast to coast solo, unsupported and unaided. While the last 32 hours were some of the most challenging hours of my life, they have quite honestly been some of the best moments I have ever experienced. I was locked in a deep flow state the entire time, equally focused on the end goal, while allowing my mind to recount the profound lessons of this journey”.

O’Brady started his trek from the Ross Ice Shelf, traveled to the South Pole and then crossed to the Ross Ice Shelf. He documented each and every step of this memorable trip on his Instagram page while he fought fierce windstorms, whiteout conditions and subzero temperatures. In order to complete the trip, he had to cross several difficult mountainous areas and travel over miles of sastrugi, which are hard wavelike ridges in the snow and ice formed by wind.

Though Colin O’Brady is not the only one to attempt the trip. In the year 2016, British explorer Henry Worsley started his solo trek of Antarctica, but he had to be rescued 30 miles before he could finish and later died of infection. Though he had traveled for 71 days unaided before that point but was not successful. Worsley launched the attempt after a century, when Ernest Shackleton, the famed Antarctic explorer, survived a failed attempt to cross the continent.

Another explorer, Lou Rudd, began his solo trek of Antarctica without help on the same day as O'Brady did. On December 13th, he has reached the South Pole and is about 90% done with the trip. If Rudd is successful, he will be the second person to achieve the record.