FDA Plans a Campaign to Prevent Youngsters from Using E-Cigarettes

The kids and youngsters are using e-cigarettes and the liquid nicotine and it is highly affecting their health. 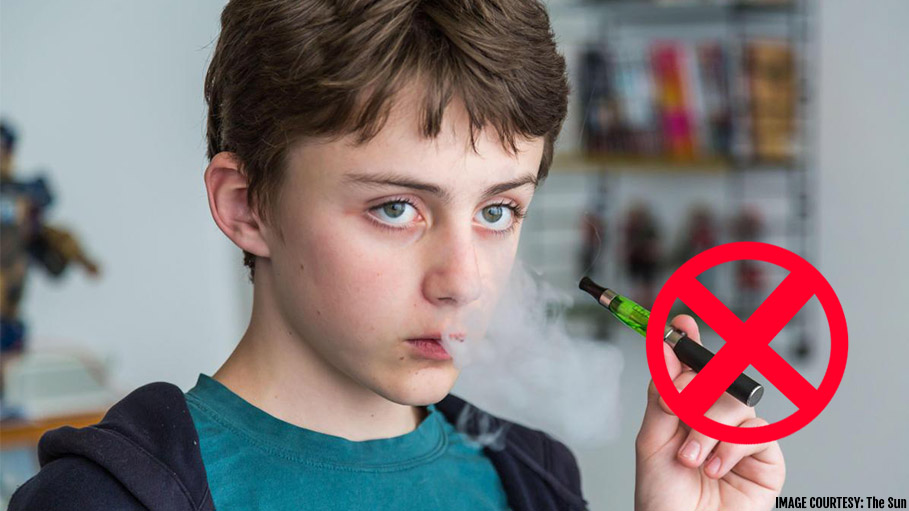 The recent ad campaign of Food and Drug Administration talks about teenagers who are involved in vaping. Their ad aims to scare the teenagers with various special effects so that they abstain from the habit. The FDA officials called this campaign as irreverent. Such an unusual campaign was planned to target the teens who are active on the social media. Sources say that such activities are often found to occur in school bathrooms secretively. It is a way to make them quit their activities by making them aware of the dangers.

There have been promotions for adult regular smokers to opt for e-cigarettes as a way to quit. But experts reveal the real fact. E-cigarettes deliver nicotine to which you get addicted. These add toxin elements in your body and can welcome unexpected health hazards.

The Centers for Disease Control and Prevention has declared that vaping is not at all safe. There remains nicotine which is highly addictive. The presence of nicotine is harmful to the adolescent brain which is in its development stage. There are also heavy metals such as lead and other chemicals that are causing potential damage to the health of the individuals.

Dr. Scott Gottlieb, the FDA Commissioner said that focus is being given on a real fact through this campaign. There’s a science behind it that says that an epidemic is on the way, and through the campaign, the same is being told to the users. Several health agencies along with FDA has taken a strong stand against the use of e-cigarettes stating that they are nothing but another tobacco product.

The director of the FDA’s Center for Tobacco Products, Mitch Zeller said that the young people of the US are highly prone to danger as they are the ones who most use this tobacco product. He declared, “We need to get the word out about the potential dangers of vaping an e-cigarette among adolescents.”

Researchers have also found that some teen vapers have cancer-causing chemicals in their body and that is enough to prove that e-cigs are not at all safe. FDA has been very much active with the problem. Last week FDA called upon 5 major manufacturers of e-cigs and declared that the use of the e-cigarettes is like an epidemic. FDA has also given them the time of two months within which they must come up with a plan to make these products go out of reach of the teens. They have even declared a threat to ban the flavored vape products. Studies have found out that these flavors of bubble gum and mango are hooking in more teens and harming their health.

Evil Leary, a member of FDA said, “As a youth leader I would like to see our generation and the ones after us grow up healthy and not addicted to any tobacco products. I want the future of our world to be safe, healthy, and tobacco-free.”

Experts are concerned about the growing number every year. The data available is highly disturbing as there is always a rise and never a fall. The age group is extending without fail. There are even reports of vaping marijuana and the popularity is increasing along with the number of health hazards.

The experts are thinking of releasing the exact figures of the data. But before that, a serious action is to be taken to curb the issue. The ad campaign is just an effort to bring awareness. Posters are being widely spread. The target area of these posters in school is the bathroom. The posters have messages like- “Strangely enough, some kids come here to put crap into their bodies”. There are other digital ads as well that will be targeted towards the social media channel. As the ads will be posted it would be geo targeted to the age group of 12-17. As these ads are targeting the school students, it will also go to websites that are more likely to be used by students. The websites that help in their assignments or the page through which they check their grades will run these ads. This way, the message will strike their mind somehow or the other and they will at least think about quitting. The awareness of the issue is the main target of the campaign.

Adolescent vaping is “uncontrolled”, pediatricians and instructors say. The association says that at the point when adolescents are on a break, amid lunch, when they really pull up a video on YouTube, they'll get served the promotion

The promotions portray nicotine as creeping through the bodies of adolescents, deforming their appearances. Past research on ban smoking advertisements has demonstrated that youngsters are more influenced by dangers to their appearance than by dangers to their well-being. Experts say the promotions appeared to different groups, including a gathering of grown-up smokers who need to stop. It was found out that these made the smokers mindful about attempting e-cigarettes as a guide to quitting smoking burnable cigarettes so the FDA won't run the advertisements on prevailing press, for example, TV.

One of the experts said that it's conceivable that e-cigarettes give a less savage option in contrast to grown-up smokers. Sources reveal tobacco advertisements with genuine confirmations will keep running for the following year. This will show the exact harms that tobacco does to the body and will accentuate the harmful side of it.

The department of FDA has decided to be clear on the matter. The decision making body of FDA stays focused on the possibility that e-cigarettes can possibly enable grown-up smokers to change their habit of using flammable cigarettes. But while doing so we must not welcome the kids to the addiction. Be that as it may, the officials said but we need to limit the exit ramp for grown-ups to close the entrance ramp for kids. One of the experts said that the FDA, which can control e-cigarettes, however, has not practiced this full power yet. They are yet to investigate approaches to make tobacco items less lethal, less addictive and less engaging. The packaging and proper labeling must be done to introduce the harmful effects of exposed liquid nicotine.

Along with this, the teachers, parents and the sellers must also be aware. Posters and ad campaigns are a part of awareness and the efforts must come from several sections of the society to reduce the risk of deadly diseases in youngsters.