France Supports India’s Stand on Kashmir, Says It Can be Resolved Bilaterally

In the joint press conference, Prime Minister Narendra Modi said the relationship between India and France is based on solid ideals of Liberty, Equality and Fraternity and not based on any kind of selfishness. 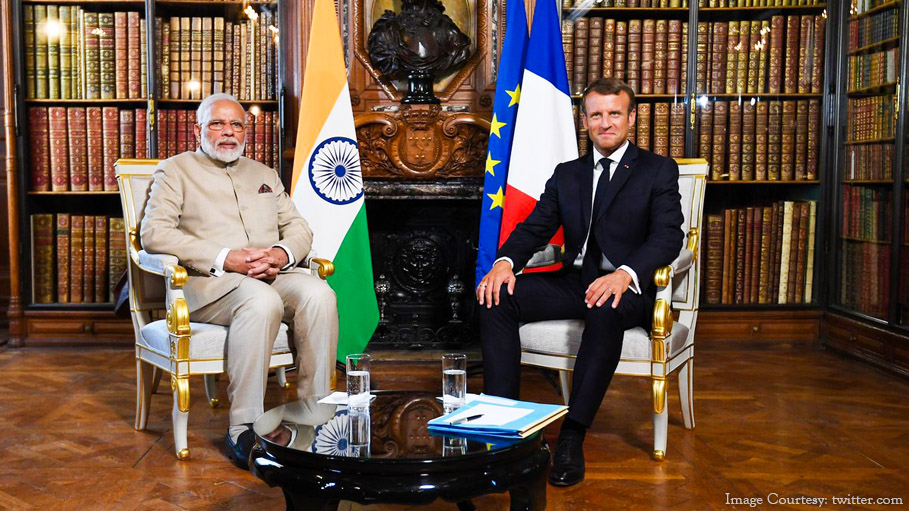 French President Emmanuel Macron has made it clear that India and Pakistan should resolve the Kashmir issue bilaterally and that no third party should ‘interfere or incite’ violence in the region, after his talks with Prime Minister Narendra Modi.

Narendra Modi, who is on a two-day visit to France, held nearly 2 hours long meeting with French President Emmanuel Macron on his first day of the visit at Chateau de Chantilly, which is regarded as one of the places in French cultural heritage, located about 50 kms north of Paris.

In the meeting, the two leaders reviewed their dynamics and the multi-faceted bilateral relationship. After one on one interaction, the delegation-level talks were held. The two countries also signed four Memorandum of Understandings.

After the talks, in a joint press statement, President Macron said that Prime Minister Narendra Modi has briefed him about the recent decision taken by India on Jammu and Kashmir and that it is to uphold its sovereignty.

President Macron said, “I told him that India and Pakistan will have to find a solution to the issue and no third party should interfere or incite violence in the region”. He also added that peace should be maintained in the region and the rights of the people should be protected. Meanwhile, France will deliver 1st of the 36 Rafal fighter jets to India by the end of next month.

In the joint press conference, Prime Minister Narendra Modi said the relationship between India and France is based on solid ideals of Liberty, Equality and Fraternity and not based on any kind of selfishness.

Apart from Terrorism and Rafael deal, France and India declared that they would stand firm to meet the challenges of climate change, environment and technology inclusive development.

Later in a joint statement released to the media, the two leaders reiterated their strong condemnation of terrorism in all its forms and manifestations including cross border terrorism and terror-related incidents both in France and India.

In the statement, “Both the leaders reaffirmed that terrorism cannot be justified on any grounds whatsoever and it should not be associated with any religion, creed, nationality and ethnicity”. The statement also added, “Both the leaders agreed to work for early convening of the Global Conference, proposed by India, to tackle the threat of terrorism around the world”.

Both Modi and Macron also called upon all member nations of UN to implement the UNSC Resolution 1267 and other relevant resolutions to designate terrorist entities. The leaders also agreed to work together on the early adoption of the Comprehensive Convention on International Terrorism (CCIT) in the United Nations.

Ahead of the meeting, President Macron took Prime Minister Modi around the centuries-old building explaining the historic significance of the chateau to PM Modi. Prime Minister Narendra Modi was also accorded a red carpet welcome at the airport.