French police warned Thursday they would prevent so-called "Freedom Convoys" from blockading Paris, as protesters against Covid rules began to drive towards the capital. 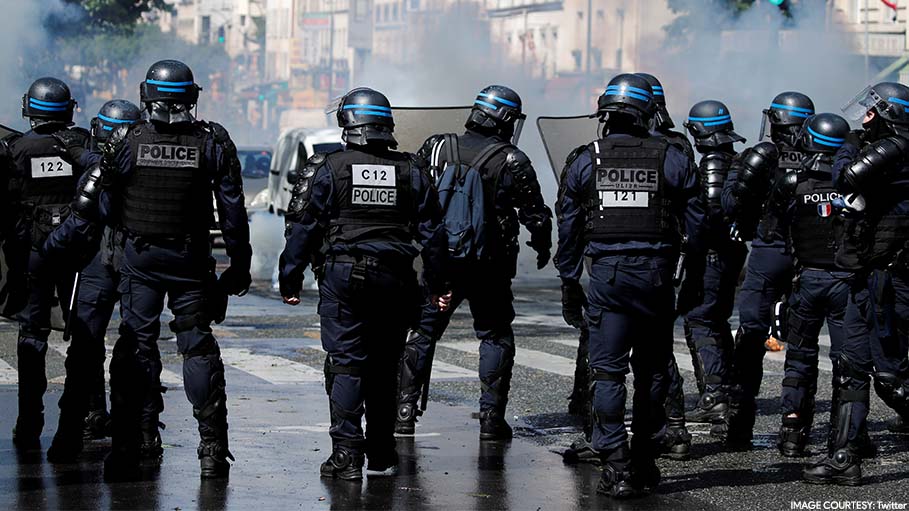 Paris: French police warned Thursday they would prevent so-called "Freedom Convoys" from blockading Paris, as protesters against Covid rules began to drive towards the capital.

Inspired by truckers paralysing the Canadian capital Ottawa, truckers and other motorists from across France are answering a call to converge on Paris on Friday.

The movement has raised fears of a repeat of the 2018 "yellow vest" anti-government protests that rocked France, only two months before President Emmanuel Macron is expected to seek re-election.

"There will be a special deployment... to prevent blockages of major roads, issue tickets and arrest those who infringe on this protest ban," the Paris police force said in a statement.

Police chief Didier Lallement had ordered officers to be "firm" with infringers, it added.

The city's ban order will remain in force until Monday.

Police said that anyone blocking roads faced up to two years in prison, a fine of 4,500 euros ($5,140) and a three-year driving ban.

"If people want to demonstrate in a normal fashion, they can do so," Interior Minister Gerald Darmanin told the LCI channel. But, he added, "If they want to block traffic, we will intervene."

The authorities in neighbouring Belgium also issued warnings as participants appeared to want to continue on to Brussels, the Belgian and European Union capital, on Monday for what they called "a European convergence".

Brussels mayor Philippe Close said the city would ban the demonstrations on the simple grounds that no-one had applied for a permit for the convoys to enter.

"Measures have been taken to prevent the blockade of the Brussels region," Close wrote on Twitter.

And Austrian police said no "Freedom Convoy" would be allowed in Vienna, saying the vehicles would cause an "unacceptable nuisance" as well as pollution from fuel emissions.

Many protesters appeared undaunted in France.

"We'll be heading to the capital whatever happens," rubbish collector Adrien Wonner, who was planning to set off from the northern Normandy region, told AFP.

The 27-year-old, a past "yellow vests" protester, added that demonstrators wanted "to make our voices heard" but "not to blockade" Paris.

Anger over coronavirus restrictions are high on their agenda, particularly the "health pass" system that prevents the unvaccinated from entering enclosed public areas such as restaurants, bars, long-distance trains or sports stadiums.

Remi Monde, a prominent social media backer of the convoys, told AFP that their top demand was a "withdrawal of the health pass and all the measures that compel or pressure people to get vaccinated".

After conventional demonstrations failed to achieve results, "we want to try something else, and see what the government's response will be to joyous, pacifist people," he added.

The movement is "far from having a solid structure" but "this especially media-friendly new form of action could give new momentum to different protest groups," a police report seen by broadcaster RTL and newspaper Le Parisien said earlier this week.

Eyhande Abeberry, 52, told AFP that the vaccine pass was "an aberration" at the Wednesday send-off for one of the convoys in the southern French city of Bayonne.

But like in Ottawa, the French protests were poised to extend beyond Covid issues, also covering low wages and high energy costs -- the same grievances that fuelled the "yellow vest" demonstrations.

"There are many similarities with the yellow vest movement," said Laurence Bindner, a co-founder of JOS Project, a platform for the analysis of extremist online content.

The "yellow vests" -- so called because they wore fluorescent safety jackets that vehicles in France are required to have -- had quickly added "anti-system protests" to their original grievance over fuel price rises, she told AFP.

Bindner said "we may have to expect extreme elements" among the current protesters, but any future easing of Covid restrictions could cause the movement to "soften" its approach.

Macron's government has already mobilised billions of euros (dollars) to limit the impact on households of surging gas and petrol prices.

Far-right presidential candidate Marine Le Pen said that she "understood" the protesters, saying that the demonstrations were "another form" of the "yellow vest" movement.

Government spokesman Gabriel Attal said he recognised the public's "weariness" with infection control measures, but insisted that France had been among the European countries with "the fewest restrictions that infringe on citizens' freedom".

Attal also indicated that the country may be in a position to drop its obligatory vaccine pass in late March or early April as cases fall. The presidential election's first round is scheduled for April 10.