Her teacher Cheryl Churilla says, “I have never heard this little girl say, I can’t. She is a little rock star. She tackles absolutely everything you can throw at her and she gives it her best”. 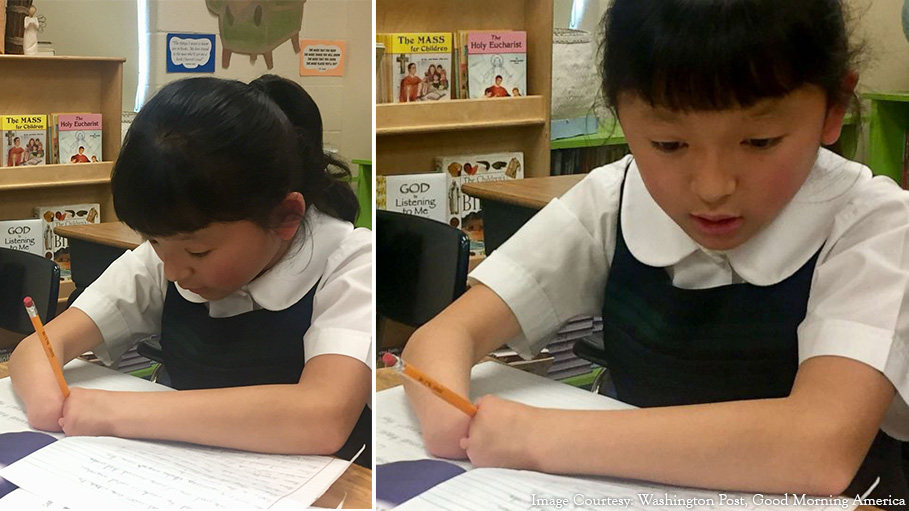 10-year-old Sara Hinesley has become an inspiration for many as she has won a national handwriting competition. What makes her special is she is without hands, but she can paint, draw and sculpt with clay at ease. She can write in English and in Mandarin too.

Sara is a third-grade student at St. John’s Regional Catholic School Frederick in Maryland. She has recently won the 2019 Nicholas Maxim award for cursive handwriting. The award is presented to two students with special needs annually.

Sara never minds the fact that she was born without hands. As her teacher Cheryl Churilla says, “I have never heard this little girl say, I can’t. She is a little rock star. She tackles absolutely everything you can throw at her and she gives it her best”.

She is the first student from St. John’s School to ever receive the Nicholas Maxim award says Principal Kathy Smith, “I feel so excited and proud”.

Sara is always spirited, as she never asked for any support for this disability of hers. Whenever she is offered help or a tool that might ease some of her tasks like cutting paper with scissors, she confidently rejects it as her mother Cathryn Hinesley confirms.

“She has this independent streak where she just knows that she can do it and she'll figure out her own way. She is beautiful and strong and mighty just the way she is, and she just lives that way. She really does”, says Sara’s mother Cathryn Hinesley.

In order to write, Sara holds her pencil between her arms. She then focuses on the shapes of letters, points and curve. Writing in cursive feels like creating artwork, Sara says. As she affirms, “I like the way the letters are formed. It’s kind of like art”.

Sara came to the US for the first time from China four years ago to join her new family. In July 2015, when she first arrived, she could write and speak in Mandarin, but very quickly she picked up English with the help of her sister, Veronica, says her mother Cathryn.

As she says, “We learned pretty quickly to trust her judgment and let her gauge how much she wants to do and then let her do it. That’s Sara. She moves through life in this way that you never really see her as having a disability because she has this can-do, I-can-tackle-anything attitude”.

Sara loves to draw things around her like flowers, birds and gardens in her free time. She also enjoys swimming, playing with her sister Veronica and participating in her school’s chess club. She enjoys every bit of life.

Cathryn says, “Sara is a testament to perseverance and the human spirit. Every day I’m amazed at the things she is able to do and that she chooses to do. She doesn’t try to find her way to avoid an obstacle, she finds a way to complete the task”.

Sara Hinesley will receive the national award at an awards ceremony on 13th June. The award also comes with a $500 prize.