In the 38-second video released by Boston Dynamics, the creator of the sturdy, battery-powered machine, which stands 4 foot 9 inches and weighs 176 pounds, is seen unleashing an exceedingly nimble routine using its legs, arms and torso. 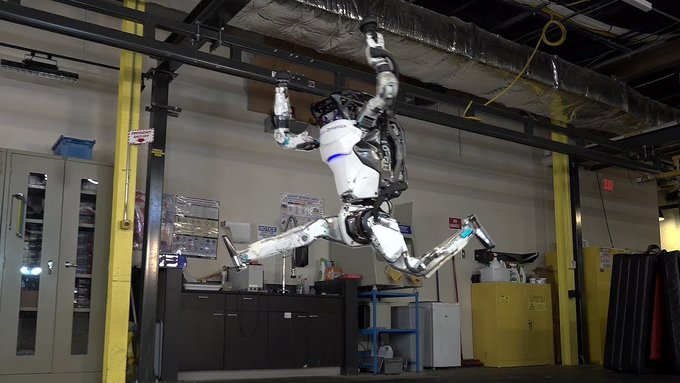 Till recently most of the machine’s maneuvering like jogging, executing box jumps or hopping over a log was within the realm of the average human athleticism. But it is not so now, as Boston Dynamics releases a new video with its eye-catching humanoid robot, ‘Atlas’, performing newly acquired acrobatic tricks.

In the 38-second video released by Boston Dynamics, the creator of the sturdy, battery-powered machine, which stands 4 foot 9 inches and weighs 176 pounds, is seen unleashing an exceedingly nimble routine using its legs, arms and torso, with a degree of dedication that one cannot even expect from a human with years of training.

Atlas the humanoid robot shows off a new and improved gymnastics routine https://t.co/YMFivTd50L by @etherington pic.twitter.com/v1IHDsgdQ6

In the video description, Boston Dynamics wrote, “We created the maneuvers using new techniques that streamline the development process. First, an optimization algorithm transforms high-level descriptions of each maneuver into dynamically feasible reference motions. Then Atlas tracks the motions using a model predictive controller that smoothly blends from one maneuver to the next”.

According to its handler, despite its smoothness, the robot is not perfect, as the description reads, “using this approach, we developed the routine significantly faster than previous Atlas routines, with a performance success rate of about 80%”.

The latest video of Atlas in gym went viral within hours of being posted online and racks up to more than 1.5 million views and thousands of comments, many of the netizens are suggesting that the robot’s newfound athleticism was also an evidence that mankind still reign over machines.

The creator of ‘Atlas’, Boston Dynamics has become popular for two things, for creating robots whose movements mimic humans and animals with accuracy that many find surprising. And secondly, without prior announcement, it posts cryptic videos of the robots online, which goes viral in no time, generating comments, which are both the mixture of excitement and terror, about the rapid rise of autonomous machines.

In the year 2017, Japan’s Softbank purchased Boston Dynamics from Alphabet. In the span of two years, it has produced four-legged robots and named them as Big Dog, Wild Cat and Spot. These robots can open doors, carry heavy loads and run up to 20 mph. But its most famous and iconic product is Atlas, the humanoid athlete that according to Boston Dynamics is “the world’s most dynamic humanoid robot”.

According to Boston Dynamics, Atlas can also manipulate objects around its environment, traverse rough the terrain, keep its balance when pushed and get back up when tipped over. Three years ago, Atlas was recorded awkwardly tramping through the snow at a very slow speed, its mechanical body would lack any of the fluidity and agility that it is displaying now.

Last year, Boston Dynamics posted a 34-second clip on YouTube showing the robot is going for a casual and smooth looking jog in a grassy residential area generating curiosity about the new avatar of the most loved robot and now with this new video it once again proved that in a matter of months, Atlas has graduated from middle school gym class and soon going to become a professional athlete.