An illegal dog slaughterhouse has been shut down in Dalian, China, recently by Chinese animal activists. Shocking photographs are proof how the horrific dog meat trade runs in Vietnam. 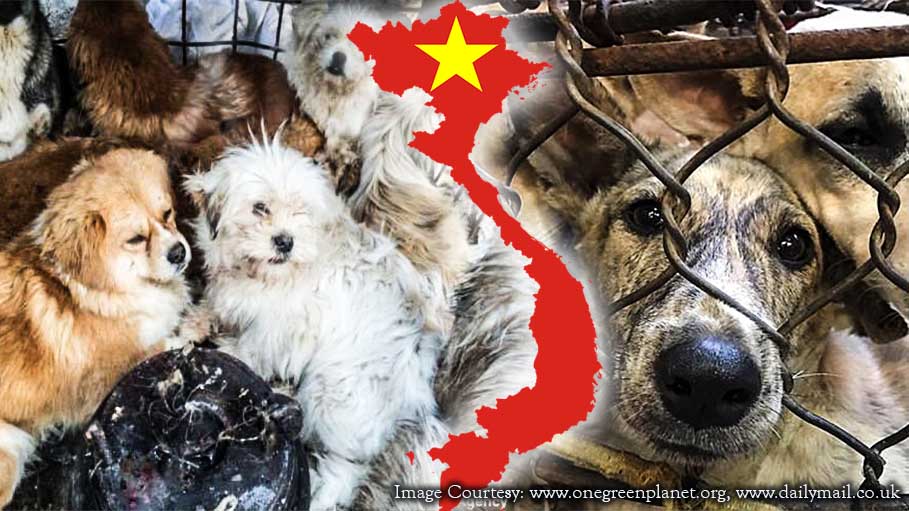 An illegal dog slaughterhouse has been shut down in Dalian, China, recently by Chinese animal activists. Shocking photographs are proof how the horrific dog meat trade runs in Vietnam. Graphic Alert!

Dog lovers exist universally and if you look into your Instagram account, you’ll definitely come across a number of your friends posing with their beloved pet dogs. But reality, is not always what you get to see on social media.

With the help of Humane Society International (HSI) and Dalian Police, the animal activists of China and campaigners of VShine joined in a raid inside the dog slaughterhouse and managed to save a few dogs. Reportedly, the dogs were horded inside a cage covered with filth and rubbish. They were also looking absolutely scared at the time of rescue.

As per the campaigners, these dogs happen to be stolen pets, as they are quite friendly to human. The good news is, the rescued dogs are fine now. They are gradually recovering in pet hospitals. Sources said, they will be available for adoption very soon.

The owner of the slaughterhouse is under arrest now for running this dreadful dog meat trade without any legal permit. When the raid was made, he couldn’t produce any paper or documentation in favor of his business. The condition of the slaughterhouse failed the health standards. And, what is more shocking, Dalian is known to be a dog-friendly zone with highest rate of pet dog registrations in entire China.

But before you proceed towards the images we raise a graphic alert. Some of the images you may find disturbing. We don’t intend to hurt any of our readers’ feelings, we are only a medium to share the news!

Animal activists of Vietnam found the dogs huddling in trucks. They are force-fed and boiled alive.

Dog meat eaters and dealers believe the more they suffer, the more ‘tastier’ they become.

Their belief also suggests, ‘tough meat makes a tough man.’ They also think that dog meat boosts a man's libido and helps in curing different illnesses. However, all these beliefs have no scientific base at all!

Dogs are known to be man’s best friend and they protect us with their lives. This article is not meant to judge any personal taste or opinion. But what is concerning, is the rise of the dog theft racket. Activists reported, majority of these dogs are stolen from homes to cater to the dog meat eaters in restaurants. Such dog restaurants are growing in number and so is the dog theft and smuggling industry.

We welcome your opinions on the dog meat trade issue, let us hear from you.