Defence Minister Rajnath Singh said, “It is a historic day for India, which also shows deepening ties between India and France. Rafale will add to the strength of IAF. Our main focus is to enhance the capability of IAF, be it jets or weapon systems”. 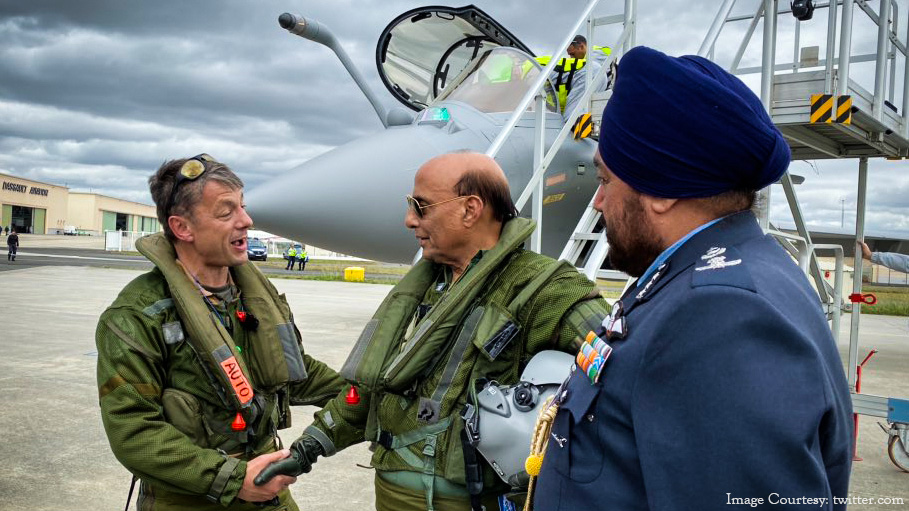 Rajnath Singh who is on a three-day visit to France, himself performed the Shastra Puja, the traditional worship of weapons during Dussehra, before the formal ribbon-cutting ceremony. This year Dussehra conceded with the 87th Indian Air Force Day.

At the handover ceremony for the Rafale aircraft, Defence Minister Rajnath Singh said, “It is a historic day for India, which also shows deepening ties between India and France. Rafale will add to the strength of IAF. Our main focus is to enhance the capability of IAF, be it jets or weapon systems”.

He also added, “The Rafale aircraft marks a massive enhancement in the Indian Air Force’s combat capability but that enhancement is not for attack purposes but as a deterrent for self defence. The credit for this milestone goes to India’s Prime Minister Narendra Modi, whose decisiveness has made this crucial air enhancement a possible today”.

The official handover ceremony took place at a facility of Dassault Aviation, in the Merignac area of Bordeaux, which is around 590 km from Paris. The Defence Minister also went for a sortie in the aircraft, declaring the official inclusion of Rafale in the Indian Air force.

During the first sortie of the fighter jet, Rajnath Singh sat in the rear cockpit while a French pilot flew the customized aircraft with the tail number RB-01. RB here stands for the newly appointed IAF chief Air Chief Marshal RKS Bhadauria, in recognition for his role in striking the Rafale deal in the year 2016.

After the sortie, the Defence Minister said, “It was a very comfortable and smooth flight. I never thought that one day I will fly at supersonic speed in an aircraft”.

After taking over the charge of the air chief, in September this year Air Chief Marshal Rakesh Kumar Singh Bhadauria has said that the acquisition of the Rafale jet fighter would give India “an edge over Pakistan and China”.

He also said, “Rafale is a very capable aircraft, after its induction in the Indian Airforce, it will be a game changer in terms of our operational capability and when we use it in combination with SU-30 and other fleets which we have, we would have a serious jump in our capability”.

Last year in August, Prime Minister Narendra Modi visited France, during which both the nations had resolved to further enhance the close defence ties between the two nations.

US Begins Repatriation of Its Nationals from India, Receives Full Support from Govt