“Yoga revolution is coming up to bring out harmony and peace throughout the world” says Dr HR Nagendra, who is popularly known as the Yoga Guru of Prime Minister Narendra Modi in conversation with Joydeep Das Gupta. 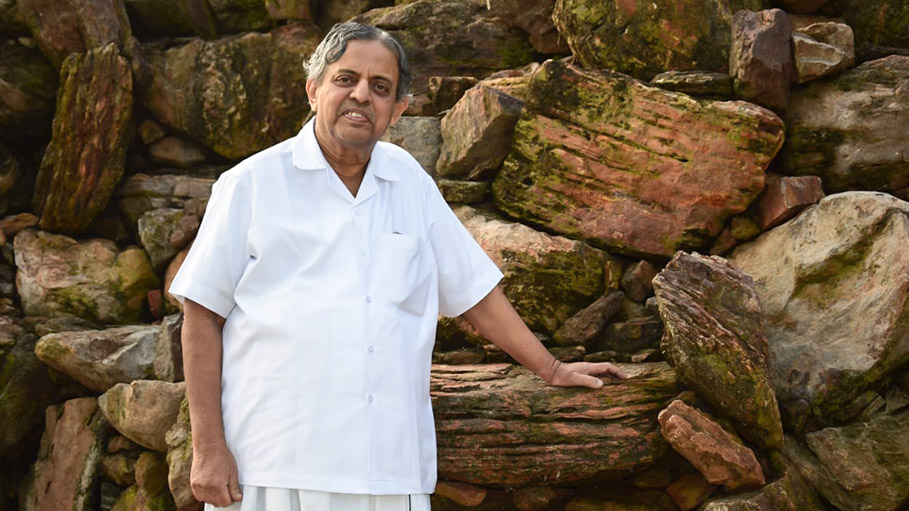 “Yoga revolution is coming up to bring out harmony and peace throughout the world” says Dr HR Nagendra, who is popularly known as the Yoga Guru of Prime Minister Narendra Modi in conversation with Joydeep Das Gupta. Dr HR Nagendra is the Chancellor of S-VYASA (Swami Vivekananda Yoga Anusandhan Samsthana) and Chairman, Advisory Committee, World Assembly on Ayurveda, Yoga and Naturopathy. Here are the excerpts of the Interview.

Q. What is your Definition of Yoga?

Yoga is a science of holistic living which is a combination of Physical Exercises, Asana and Pranayam. It is also a way of life to raise our self from a normal level to great super divine human being and to lead us to the perfection itself. To expand our personality from annamay kosha to pranamoya kosha, monomaya kosha to ananda moy kosha to reach the state of infinite bliss and infinite happiness. Infite power, knowledge and freedom.

Q. What is the relationship between the Practice of Yoga and Seeing God?

And that which is beyond, is pure consciousness, beyond the calculation of space and time, which in modern language can be called reality or infinite bliss. That which is original, full of purity and pure Brahman or Nirakar Brahman, whom we can say as pure consciousness, reality and that is our original state and also that is from where the whole creation has come and Yoga can be a medium to reach this state.

Q.  Why is it important to have Physical Yoga (Hatha Yoga) in our daily life?

Yoga has several dimensions. Swami Vivekananda has said, If you are born with Intellect then it is Gyan Yoga. Birth with Will power then is Raja Yoga, birth with emotion is Bhakti Yoga, birth with action is Karma Yoga. For any of this Yoga, say for Raja Yoga or any other yoga one has to pass through Yama, Niyama, Asana, Pranayam, Pratiyara, Dharna, Dhyan, and Samadhi. Asana being the third of Astanga Yoga and is thus important to get mastery over the mind thereby lead us to our original state of pure consciousness.

So use yoga or asana to see that your body gets purified and free from the diseases, most important of all is to gain the mastery over the mind through yogic postures that is the role of Yoga. Father of Yoga - Patanjali has said that it is a state of sthira and sukha that is stage of complete stability and that is complete ananda. Where as in Hatha Yoga, we have a large number of yogic postures that have been prescribed and lots of Pranayam, mudhras, kriyas to discipline our mind to reach the stage of complete divinity.

Q. Yoga has become an International Movement now. How do you see this?

It is a wonderful thing that has happened and thanks to our Prime Minister who has brought Yoga to the International stage that today International Day of Yoga is organized throughout the world. We at S-VYASA were now asked to prepare a protocol, 35 minutes Yoga protocol in which we intelligently bought all the four streams of Yoga and those who understand the four streams of Yoga, would be able to see how this has been bought for and best of all. It is a very simple thing that will bring out the holistic vision of yoga and not merely the asana. It has asana, pranayam, meditation, value education. Through this, crores of people in India and across the world will be benefited and people can truly understand the holistic vision of Yoga.

Some people say that, but Prime Minister has his own way of presenting this. He is such a master that he gave wonderful speeches and which are accepted by a large number of countries and most important 35 Islamic countries also approved and sponsored the day to be celebrated as International Day of Yoga. That has been the biggest achievement. In 11th September 1893, there was one Narendra, Swami Vivekananda who took Indian Spiritual wealth to the West when he delivered his famous lecture in Chicago in the World Parliament of Religions years ago, now another Narendra brought forth this mission of Yoga for the people at large.

(N.B: While addressing the 69th Session of United Nations General Assembly on September 27th, 2014, the Prime Minister of India Shri Narendra Modi urged the world community to adopt an International Day of Yoga)

Q. How you got connected to Prime Minister Narendra Modi?

He came to Prashanti Kuteeram long back, when he was a Pracharak. He use to come to meet my uncle Seeshadri Ji and that is how he got introduced to holistic vision of Yoga, the scientific dimension of Yoga and from then on he started following yoga and practicing and bringing it to life and he is a wonderful personality who has grasped the essence of India’s cultural heritage in the form of Yoga which is the latest contribution to the Indian thought and culture.

Q. Is it true that you are his Yoga Guru?

Yes, some people say that, but I don’t think that way as we are bonded as friends and colleagues.

Q. Now, tell us something about yourself. What convinced you as a young man to quit a lucrative job in the US to pursue Yoga in India?

I understood that modern science can help us understand the physical body at large. Our knowledge therefore about the physical world is complete and we are successful in mastering this science, like for example putting a man on the moon, scientific farming and what not. But the science cannot tell us beyond the physical world to understand something like Prana, mind, intellect-consciousness. Something like God. Therefore when I started my life as a young researcher at the Indian Institute of Science, we started discussing this dimension of life. What is beyond and for this we need direction and that’s how my life changed.

More I went deeper, more I was convinced that this knowledge needs to be brought for the people at large. Best of Nobel laureates and scholars and scientist are now trying to understand the secret of Upanishads. To Science and then beyond and by becoming a simple practitioner I am trying to understand more and more and in this large knowledge base of Yoga I am probably able to get a small grasp.

Such is the huge amount of the knowledge, our ancient seers had made thousands and thousands of years back and that has been brought forth and were beneficial for people in many ways and for this purpose we created this University of S-VYASA in which we want to grew and understand the secrets of Indian cultural base in the field of Yoga and spirituality and to apply them to life and yoga. Yoga in humanities and Yoga in Sciences for the last 20 years. As Swami Vivekananda said combining the best of the west with the best of the east.

Q. How do you see the future of Yoga in India and the world?

Yoga has a great future. Yoga is a revolution in making, just like the Industrial revolution, Yoga revolution is coming up to bring out harmony and peace throughout the world.

Additional Information: S-VYASA is preparing for a three-day workshop WAAYN (World Assembly on Ayurveda Yoga and Naturopathy). The idea behind WAAYN (7-10 November 2019) is to reach to the masses and to ensure this Interaction is under progress with leading Medical fraternity (Modern Medicine and Holistic Health Industry), Research and Educational Institute, including the Ministry of Health and Family Welfare and Ministry of AYUSH to support and actively take part in the event.