US President Joe Biden on Thursday proposed a huge $33 billion package for arming and supporting Ukraine, saying that "caving" in to Russia is not an option for the West as the war stretches into a third month. 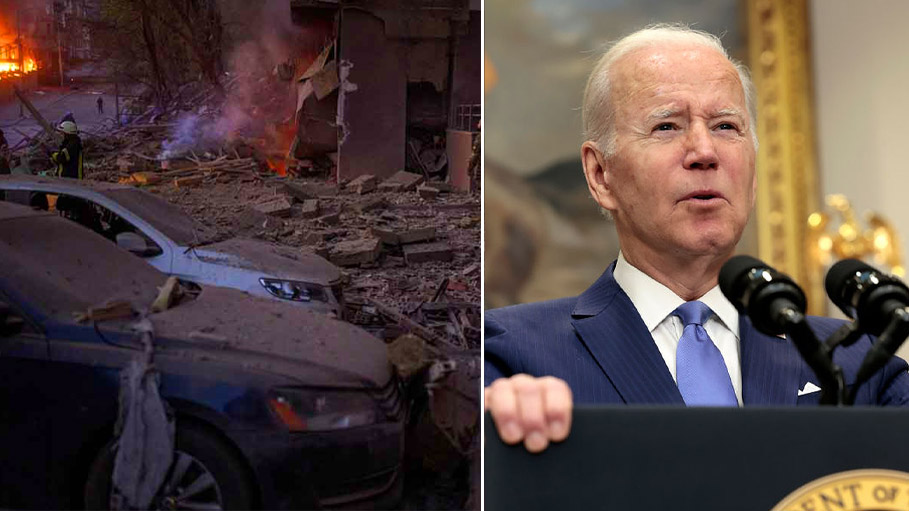 Washington: US President Joe Biden on Thursday proposed a huge $33 billion package for arming and supporting Ukraine, saying that "caving" in to Russia is not an option for the West as the war stretches into a third month.

He acknowledged the dramatic costs of US backing for Ukraine, but said there was no real choice in the struggle with Russian President Vladimir Putin.

"The cost of this fight is not cheap. But caving to aggression is going to be more costly if we allow it to happen," he said.

Reflecting the scale of the US assistance to Ukraine, which is badly mauling the larger and more heavily armed Russian forces, Biden confirmed that the United States has already sent 10 tank-killing weapons for every Russian tank sent into the country.

However, he pushed back against increasingly heated claims by Russian officials and state media that Moscow is fighting the entire West, rather than only Ukraine.

"We're not attacking Russia. We are helping Ukraine defend itself against Russian aggression," Biden said.

And after Russian state gas giant Gazprom announced it was cutting supplies to NATO and EU members Bulgaria and Poland, Biden said the United States was working to shore up European energy supplies.

"We will not let Russia intimidate or blackmail their way out of these sanctions. We will not allow them to use their oil and gas to avoid consequences for their aggression," Biden said.

The bulk of the proposed $33 billion package will be "$20 billion in military and other security assistance. This means weapons and ammunition flowing to the Ukrainian people," a senior US official told reporters.

A further $8.5 billion in economic aid will "help the government of Ukraine respond to the immediate crisis," while some $3 billion is proposed to fund humanitarian assistance and address the global food supply price shock resulting from Russia's onslaught against Ukraine, a major wheat exporter, the official said.

The proposed package also includes funding to address economic disruptions in the United States and elsewhere, ranging from the impact on food supplies to availability of critical components used in high-tech manufacturing.

Congress needs to approve the request and while both Republicans and Biden's Democratic Party have signalled they are keen to keep backing Ukraine, a dispute over Biden's request for an unrelated $22.5 billion Covid pandemic package threatens to complicate the approval process.

"I don't care how they do it, I'm sending both up," Biden said, but "we must also not let our guard down in our fight against Covid-19."

Biden announced a proposal to ratchet up pressure on Putin's billionaire inner circle, with enhanced seizure and forfeiture procedures allowing oligarchs' assets to be "sold off" to "remedy the harm Russia caused and to help build Ukraine."

To date, European Union allies have frozen more than $30 billion in Russian assets, including almost $7 billion in luxury goods belonging to oligarchs, including yachts, art, real estate and helicopters, the White House said.

The United States has "sanctioned and blocked vessels and aircraft worth over $1 billion, as well as frozen hundreds of millions of dollars of assets belonging to Russian elites in US accounts," said the statement. One of the latest seizures was of a $90 million superyacht belonging to Russian billionaire Viktor Vekselberg.

The legislative package being proposed by Biden would also tighten the legal squeeze on oligarchs as they try to hide their funds.

One proposal is to allow seizing of property used to evade sanctions. Another is to expand the arsenal used by US prosecutors, doubling the amount of time they are allowed to pursue money laundering investigations from five to 10 years, and applying anti-racketeering laws used to tackle organized crime to sanctions evasion.