Catherine, the Princess of Wales, and Meghan, Duchess of Sussex, on Monday each opted for pearls to mourn Queen Elizabeth II at her state funeral at Westminster Abbey. 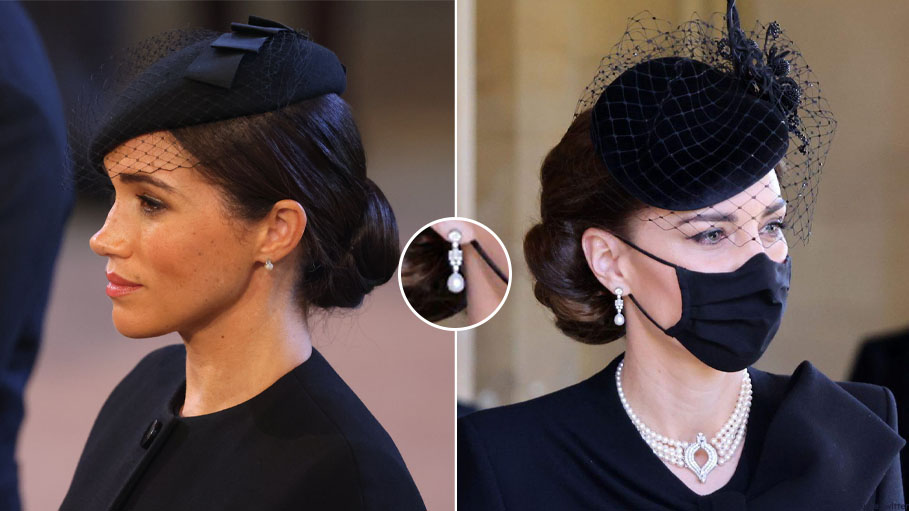 London: Catherine, the Princess of Wales, and Meghan, Duchess of Sussex, on Monday each opted for pearls to mourn Queen Elizabeth II at her state funeral at Westminster Abbey.

Pearls are often referred to as mourning jewellery -- a tradition said to date back to Queen Victoria's era in the 19th century.

This was accompanied by a pair of oval stud earrings featuring a sapphire stone encircled with diamonds and a gold pendant necklace.

Catherine, the wife of heir to the throne Prince William, chose the same striking necklace and earring combination which she wore just over a year ago for the funeral of Queen Elizabeth II's husband Philip.

Her Japanese choker with four rows of pearls and a curved central diamond clasp was accompanied with a pair of Bahrain drop pearl earrings, both from the queen's personal jewellery collection.

The Princess of Wales also chose the same jewellery for the Queen and the Duke of Edinburgh's 70th wedding anniversary dinner in 2017.

It is believed the necklace was commissioned by the queen using pearls gifted to her by the Japanese government after her first state visit to the nation in 1975.

The earrings were made using two from a collection of pearls given to the queen as a wedding gift from the Hakim of Bahrain in 1947.

Both were previously worn by William's mother Princess Diana during a state visit from Queen Beatrix of the Netherlands in 1982, while the queen was pictured wearing the set during an engagement in Bangladesh the following year.

Meghan chose pared back jewellery with a pair of pearl and diamond stud earrings gifted to her by the queen and which she wore on her first joint engagement alongside the monarch in June 2018.

In a nod to the queen's lifelong love of horses, Princess Charlotte, the seven-year-old daughter of William and Catherine, wore a small diamond horseshoe brooch which was a gift from her late great-grandmother.

The queen's personal jewellery collection, from which many of the pieces worn at Monday's funeral were drawn, is steeped in royal history and contains over 300 items including brooches, necklaces, bracelets, earrings, rings, watches and pendants.

The Princess of Wales was also seen wearing the queen's diamond leaf brooch featuring a trio of pearls for the procession to the lying in state on Wednesday.

Although the late queen's will is private, it is expected that the jewellery will be passed on to members of the royal family including the monarch's four children and their spouses.

SEE ALSO:
Meghan Says Kate Middleton Made Her Cry Before Her Wedding

Kate Middleton and Meghan Markle as Stickers for Chat Apps