The royal couple took the ride in a decorated rickshaw, which is fitted with lights and looked colourful displaying all colours and prints over its body to arrive at the venue. 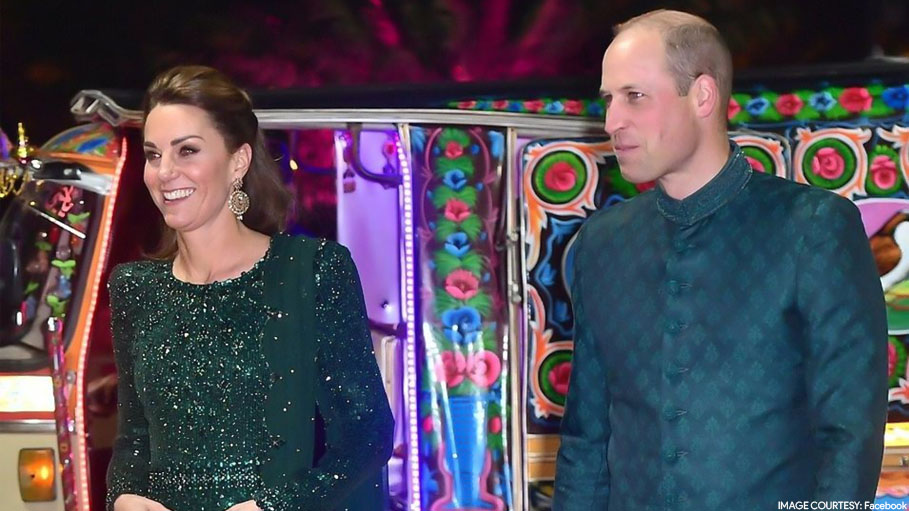 The Duke and Duchess of Cambridge, Prince William and Kate Middleton, who are on a five-day visit to Pakistan, reached the National Monument in Islamabad for a dinner hosted by the British High Commissioner in Pakistan in a specially painted motorised rickshaw.

The royal couple took the ride in a decorated rickshaw, which is fitted with lights and looked colourful displaying all colours and prints over its body to arrive at the venue. As her dinner look, Kate wore a glittering emerald green gown with traditional hanging earrings while Prince William was seen wearing a traditional bandh-gala knee-length sherwani, with matching trousers.

In the special reception hosted by the British High Commissioner to Pakistan, the duke made a speech, supporting Pakistan, the second biggest commonwealth nation as a ‘key partner and friend’ and expressed hopes that the visit will also strengthen relations between the two nations. Prince William also said, “We share unique bonds and so it will always be in our best interests for Pakistan to succeed”.

The royal couple started their first day of the official tour in Pakistan by visiting various schools in Islamabad to highlight the importance of education for young children. They visited schools and educational institutions including the Islamabad Model College, a government school in central Islamabad, which was established in the year 1978 for the education of students between the age group of 4 and 18 and four local schools in Margalla Hills.

According to the Kensington Palace press release, the royal couple also “took part in activities designed to educate young people on environmental protection and wildlife conservation”.

After the school visit, William and Kate had an official meeting with President of Pakistan Arif Alvi and his wife at their official residence. The Cambridges had lunch with Prime Minister Khan, at his residence. Imran Khan is an old friend of William’s late mother, Princess Diana.

During their meeting with Prime Minister Imran Khan, among other topics, Prince William recalled a gathering in 1996 when the Primer Minister, who is a cricketer-turned-politician, announced his political ambition to the teenage prince and his mother. Imran Khan was elected Prime Minister of Pakistan in July last year, who also said that politics had been as hard a slog as his earlier career as a cricketer.

The Royal couple arrived in Pakistan on Monday and is received by the Foreign Minister of Pakistan Shah Mehmood Qureshi and his wife at the Nur Khan Airbase. Since 2006, it is the first royal tour to Pakistan. In 2006 Prince of Wales and the Duchess of Cornwall, Prince Charles, and Camilla, visited Pakistan.

The security of the visiting Duke and Duchess of Cambridge is of utmost importance and therefore high level logistical and security measures were undertaken, including a “ring of steel” of more than 1,000 police personals, have been deployed 24x7 for the security of the royals. Today the program also includes, a stop where Princess Diana visited just months before she died in 1997.