Kim Kardashian has been shot sizzling in red Sari for Vogue’s India Exclusive Magazine Cover. This March 2018 edition for Vogue is already out. Also, watch the full ‘behind the scenes’ video here. 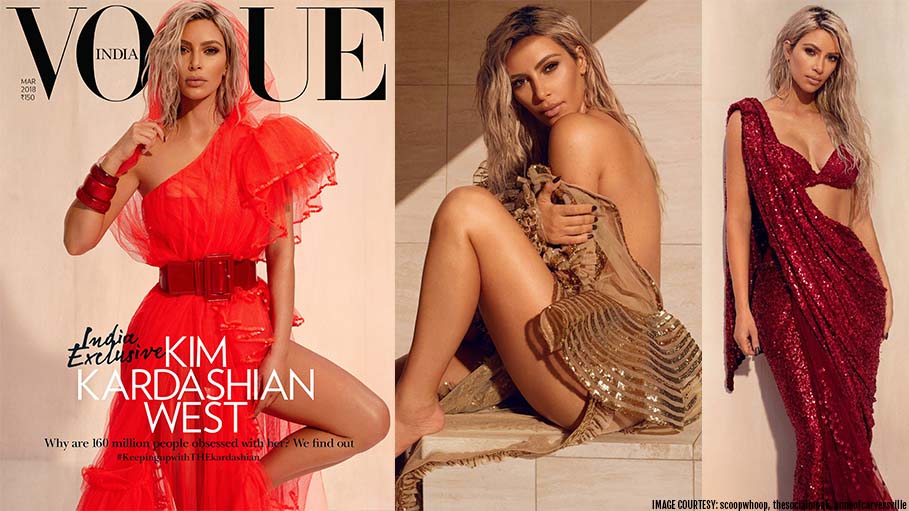 Kim Kardashian has been shot sizzling in red Sari for Vogue’s India Exclusive Magazine Cover. This March 2018 edition for Vogue is already out and making a lot of noise amongst the ‘Desi’ boys and girls! Also, watch the full ‘behind the scenes’ video here.

Kim Kardashian West which is a brand in itself, recently embraced Eastern wardrobe for Vogue’s India Exclusive Magazine Cover.

Scroll down to see the full video.

This one-shouldered sari-dress is designed by Jean Paul Gaultier. The sari-dress was coupled with a pale gold shimmer mini with a tulle train from Falguni and Shane Peacock.

From ravishing red lehenga to sparkling red Sari - the Kardashian sported it all and she carried all off with sheer sensuousness.

Have a glance at her glitzy Sari look! It’s by Sabyasachi.

Have a close look on her earrings girls! It’s from Estaa and you’re surely gonna love this piece of grandeur.

Kim Kardashian, in her first ever interview with Vogue India, revealed a lot about her career journey. How from a stylist she went on becoming a celeb who now has her own empire. She told Vogue India that Kim and her mom were about to run a clothing store, they were not even sure where they were heading to.

When asked for a piece of advice to the young entrepreneurs she said, “Don’t give your name away. Stand your ground on being an owner in your company.”

Kim Kardashian’s embroidered red bold look in this lehenga is surely a classic one. Outfit by Anamika Khanna and shoes by Charlotte Olympia.

Scroll down to see the full video.

Watch the full behind the scenes video here -