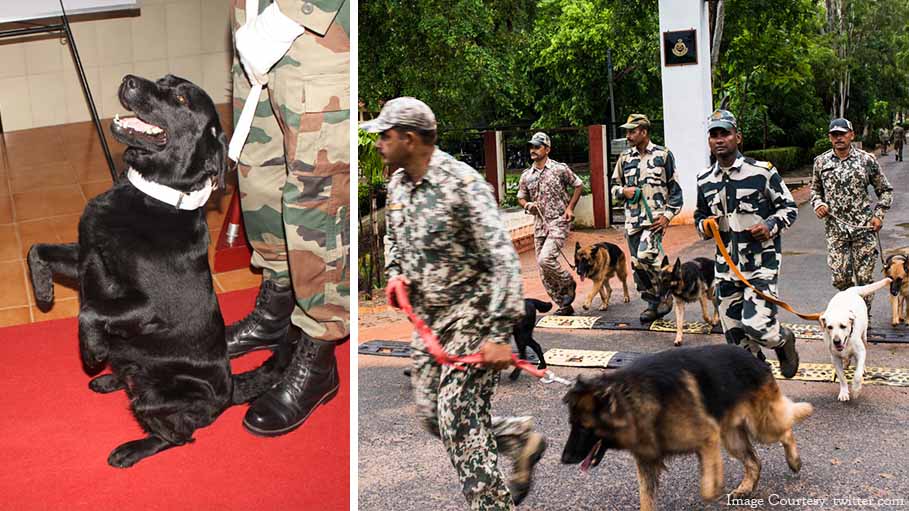 In his 'Mann Ki Baat' radio broadcast, Prime Minister Narendra Modi on Sunday paid glowing tributes to India's canine brigade and specifically mentioned about 'Sophie' and 'Vida', the two brave dogs who were awarded the Chief of Army Staff's Commendation Cards on August 15.

Modi also exhorted those planning to raise a pet dog to adopt one from the Indian breeds, saying they are "very good and capable".

"Sophie and Vida are the dogs of the Indian Army who have been awarded the Chief of Army Staff 'Commendation Cards'. Sophie and Vida received this honour because they performed their duties diligently while protecting their country," the prime minister said, praising the "bravehearts".

Military officials said Vida, a black labrador belonging to an Army dog unit under Udhampur-headquartered Northern Command, was instrumental in the timely detection of five mines and one grenade buried underground in Kashmir, preventing possible casualties and injuries of troops.

Sophie, a cocker spaniel trained in explosive detection, saved lives by sniffing out the presence of initiator/accelerant in Delhi which could have been hastily used to fabricate an IED (improvised explosive device), they said.

"Sophie and Vida received this honour because they performed their duties diligently while protecting their country. Our armed forces and security forces have many such brave dogs who not only live for the country but also sacrifice themselves for the country," the prime minister said.

He said such canines have played a very important role in thwarting numerous bomb blasts and terrorist conspiracies.

In his radio broadcast, Modi also mentioned about 'Balaram', a canine who sniffed out ammunition on the route of the Amarnath Yatra, and 'Bhavana' who searched out an IED in 2002 but died later in an explosion triggered by terrorists.

"You might have seen a very moving scene on TV a few days ago, in which the Beed Police were giving their canine colleague Rocky a final farewell with all due respect. Rocky had helped the police in solving over 300 cases," Modi said.

Mentioning about Indian dog breeds, the prime minister said they cost less to raise and are better adapted to the Indian environment and surroundings, adding that the security agencies are also inducting these dogs.

"Among the Indian breeds, Mudhol Hound and Himachali Hound are of excellent pedigree. Rajapalayam, Kanni, Chippiparai and Kombai are fabulous Indian breeds. They cost less to raise and are better adapted to the Indian environment and surroundings," Modi said.

He further said: "Search for these breeds on the internet and know more about them. The beauty and qualities of these breeds will leave you astounded!"

The military officials said the superiority of the "canine soldiers" employed by the Indian Army has led to an increasing demand from friendly foreign countries including Bangladesh, Myanmar and Cambodia for acquiring dogs trained by the Remount and Veterinary Corps (RVC).

Countries like South Africa, Nepal, Myanmar, Sri Lanka and Seychelles are keen on getting their personnel trained in dog handling courses conducted by the Indian Army. Japan has also shown interest in the training standards of Indian Army canines, they said.

The officials said since July last year, Army dogs have contributed to a number of operational successes including 30 cases of recovery of IEDs and explosives, 14 cases of recovery of arms, ammunition and other war-like stores and five cases of tracking of terrorists leading to their elimination.

"In addition, they have also been saviours of many lives during avalanches, earthquakes and other natural disasters," said an official.

"Army dogs trained in the Indian Army are rendering yeoman service to the nation by performing stellar ‘Op successes’ as ‘force multipliers’ in various counter insurgency/counter-terrorist operations," said the official.