Media in the US has also sharply reacted to these comments of the US President. National affairs editor at New York Magazine, Gabriel Sherman has described the comment as “full-on dictator speak”. 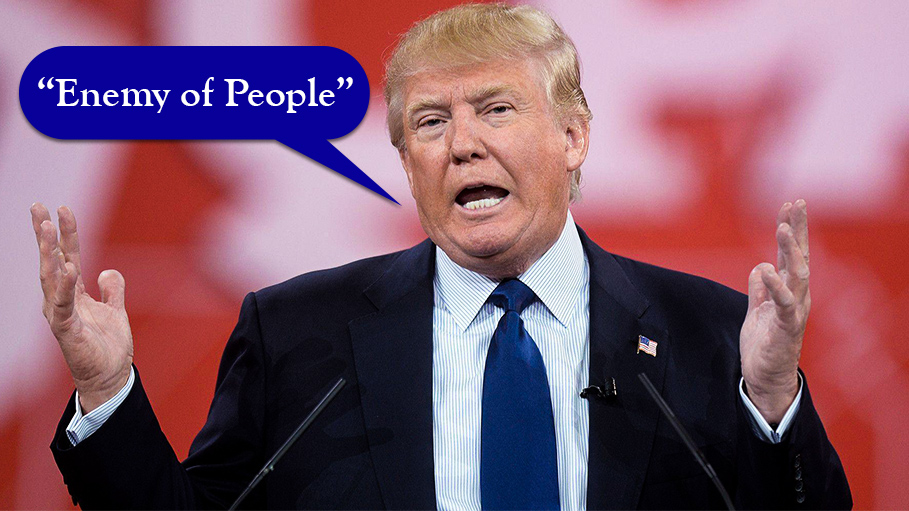 US President Donald Trump has once again used bullying words such as “enemy of people” and “opposition” against the media accusing certain media and journalists of covering the Russia probe not fairly.

Now with the support of the Mueller report, which has recently come out and has cleared him of conspiracy, Trump took to Twitter to start his bashing against the media, “The Mainstream Media is under fire and being scorned all over the World as being corrupt and FAKE. For two years they pushed the Russian Collusion Delusion when they always knew there was No Collusion. They truly are the Enemy of the People and the Real Opposition Party!”.

Media in the US has also sharply reacted to these comments of the US President. National affairs editor at New York Magazine, Gabriel Sherman has described the comment as “full-on dictator speak”.

The New York Times wrote in its editorial, Enemy of the people is a phrase “typically used by leaders to refer to hostile foreign governments or subversive organizations. It also echoed the language of autocrats who seek to minimize dissent.”

US President Donald Trump has previously used this quote “enemy of the people” to describe his political rivals. Though he always accuses the media of initiating fake news against him and does not give him accurate coverage, he never used this phrase against media.

The two-year probe led by special prosecutor Robert Mueller “Mueller Report” is out. The probe was into Donald Trump’s links with Russia and his suspicious 2016 presidential campaign that colluded with the Russian agents in attempts to influence the election in his favor.

According to a brief summary of the Muller Report recently released by Trump’s attorney general William Barr, Mueller could not find any evidence of collusion, although he did establish that Russian agents tried to disrupt the election.

Donald Trump has thus seized the opportunity to bash the media, which has time and again accused him of colluding with Russia and which has subjected him to a witch-hunt by covering the bombshell investigation, which the President claimed was part of an organized assault against him.

The summary of the report released by Trump’s attorney general William Barr says Mueller could not decide whether Donald Trump obstructed the justice and left that up to the Justice Department. Barr wrote in the conclusion of the report that Donald Trump had not in fact committed such a crime.