Melania flashed an expression that one would define as bizarre and strange. She also looked terrified. Her expression has now attracted the media and has even taken over the internet. 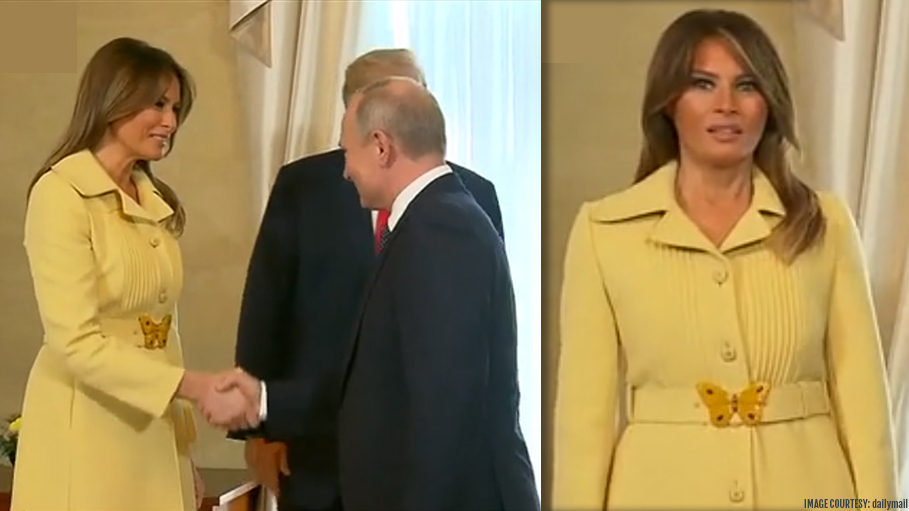 Melania Tump’s facial expression after shaking hands with Russian President Vladimir Putin before the Helsinki summit could begin, is going viral. Here’s why the ‘haunted’ expression on the First Lady’s face has taken over social media.

American President Donald Trump along with First Lady Melania Trump had the pleasure of meeting Russian President Vladimir Putin in Helsinki, Finland, this Tuesday. The two world leaders reportedly discussed on building and improving relations between the two countries, going forward. Despite the controversial meet between the two powerful leaders, what caught the media’s attention the most was Melania’s bizarre expression after she shook hands with the Russian President Vladimir Putin.

This is how it all started. President Donald Trump first went ahead and offered his salutary long handshake with the Russian President and next in the line was Melania Trump. She shook hands with the President in her customary dignified style clasping it for a couple of seconds and smilingly exchanging a few words. Putin, as usual, appeared confident and relaxed through his body posture. The three of them then braced themselves as the photographers began clicking photographs before the summit could begin. It was during this period, for a split of a second, Melania flashed an expression that one would define as bizarre and strange. She also looked terrified. Her expression has now attracted the media and has even taken over the internet.

Watch Melania's face and body language after shaking Putin's hand. She is scared to death of him.pic.twitter.com/4tEj7rXuLl

What did that expression really mean and why did she look so terrified? Melania’s expression has left her followers pondering after this strange act of hers. The dignified First lady, however, was quick enough to flash her beaming smile to the photographers soon after that expression. Despite her changing the facial expression soon enough, followers were quick to set Twitter on fire.

"Watch Melania's face and body language after shaking Putin's hand. She is scared to death of him. "

"OMG I was looking for this all day - they finally just showed it on MSNBCWatch her face!! pic.twitter.com/nBSEKshhlJ"

"She looks like she just stared into the eyes of evil...."

Melania was constantly by her husband’s side in the meet except when Donald had his two-hour session with Putin. Donald Trump’s meet With Vladimir Putin was the center of criticism. In the conference, Trump stated that Russia didn’t meddle in the US elections and he sided with Russia than his own US intelligence who alleged that Russia hacked the US elections. Trump said "just said it is not Russia... I will say this: I don't see any reason why it would be". Soon the President took a U-turn from his remarks when he told reporters a couple of days back "The sentence should have been, 'I don't see any reason why I wouldn't, or why it wouldn't be Russia. So you can put that in, and I think that probably clarifies things pretty good.” Looks like the Helsinki summit 2018 has caught the media’s attention for a variety of reasons.