The First Lady was first spotted adorning the jacket while she was boarding the plane at Air Force Base in Maryland. 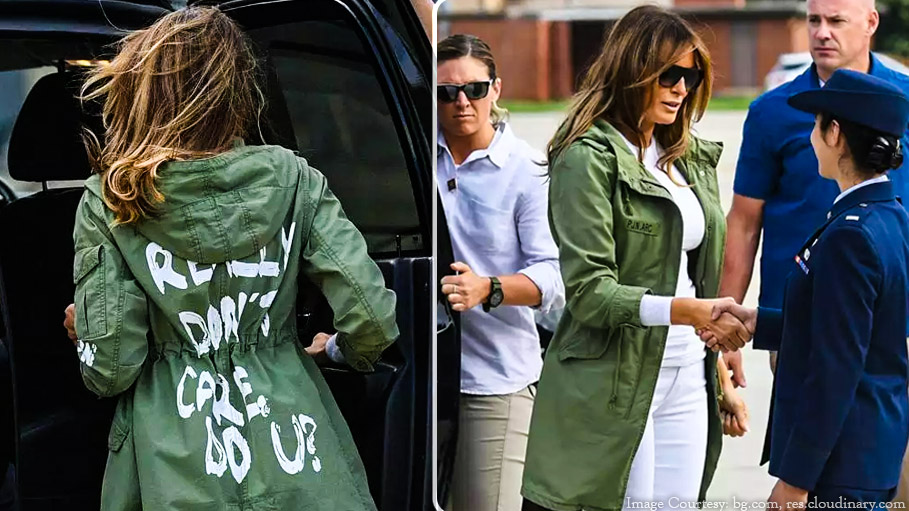 First Lady Melania Trump has caught herself in a storm of controversy for wearing a provocative Zara Jacket while visiting a Texas Detention Center that houses immigrant children. The text on the back of the Olive green Jacket read “I really don’t care do you?”

The First Lady was first spotted adorning the jacket while she was boarding the plane at Air Force Base in Maryland. She was traveling to McAllen, Texas to visit children in the immigration detention center called Upbring New Hope Children Center. At first, the text couldn’t be read clearly. Later on, Daily Mail confirmed that the jacket was a $39 cargo green jacket from Zara. Flotus was heavily criticized for her choice of jacket as the occasion entailed meeting children who were caught in midst of an immigration crisis and who were separated from their parents. They expressed that this is one statement jacket that didn’t go well with the occasion and the first lady could have worn it probably for a more suitable or a casual occasion.

The President and Melania Trump’s Spokesperson Supports Her

Speculations were doing the rounds whether Melania was trying to send out a message by wearing the provocative jacket. As soon as the first lady reached Texas though, the controversial jacket was gone. She entered the detention center wearing a cream military style jacket with white jeans and sneakers. For his part, President Donald Trump stated that the text on Melania’s jacket is synonymous with the Fake News Media.

“I REALLY DON’T CARE, DO U?” written on the back of Melania’s jacket, refers to the Fake News Media. Melania has learned how dishonest they are, and she truly no longer cares!

While Donald Trump tweeted that the jacket with the text was worn intentionally to send across a message to the media, Melania’s spokesperson Stephanie Grisham said that the text on the jacket was not intended to send a message. "It's a jacket. There was no hidden message," Grisham said. "After today's important visit to Texas, I hope the media isn't going to choose to focus on her wardrobe.” Grisham added, "If media would spend their time & energy on her actions & efforts to help kids - rather than speculate & focus on her wardrobe - we could get so much accomplished on behalf of children.”

Speaking of the visit, Melania’s spokesperson stated that her agenda included “taking part in briefings and tours.” In a roundtable briefing, Melania Trump thanked all officials who worked hard for the welfare of these kids. The Upbring New Hope Children’s Shelter houses 55 children- 27 boys and 28 girls.  Melania asked crucial questions like how often these children speak to their families, how they are emotionally cared for and how long they are placed in the facility before being placed elsewhere. She wanted to learn how the center works for the growth and development of these children. The first lady visited the children in three different classrooms.

She asked questions like “Where are you from?”, “How old are you?” and “Have you made friends?” The children answered her and some of them used a translator to answer her questions. Melania’s other goals were to thank law enforcement and social providers for their work. The First Lady’s aim is to lend support and hear about how the administration can build up on the efforts of reuniting children with their families. Through her statement from the White House on Thursday night, Melania expressed that the meet impacted her deeply. She hopes that the members of the Congress will solve the immigration problem with “common sense immigration reform” that will keep borders secure and families together.

After her meeting with the kids, Melania wore the controversial jacket once again on her return trip. Was this to balance out the speculations that arose when she wore the jacket on her arrival at the detention center? Maybe so.