Police have recovered more than 40 Skulls, dozens of Bones and a Fetus in a glass jar, which are kept next to an altar inside a den suspected to be of Drug Traffickers in Mexico City. 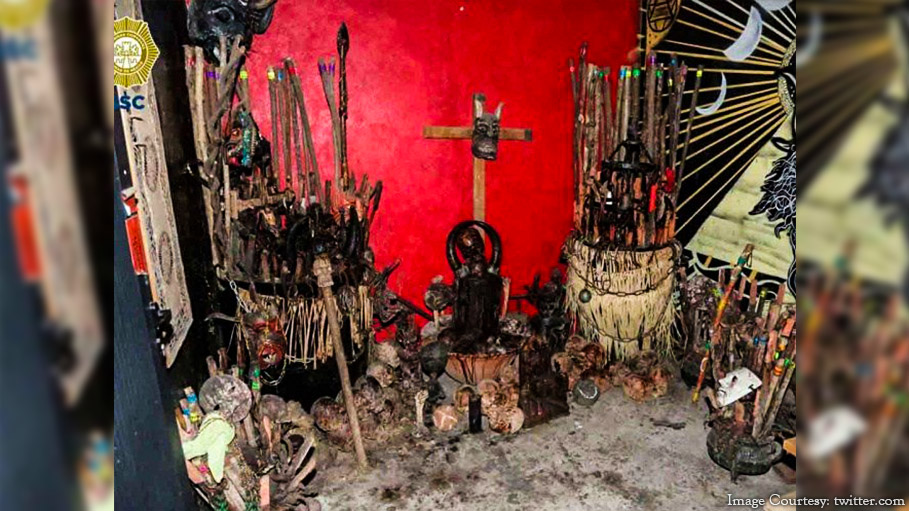 Police have recovered more than 40 Skulls, dozens of Bones and a Fetus in a glass jar, which are kept next to an altar inside a den suspected to be of Drug Traffickers in Mexico City.

Police have also arrested 31 people on suspicion of Drug Cartel activity from various locations in the city after the raid in the den located in the central Tepito neighborhood. Though the court has ordered police to release 27 of the suspects.

A photo released by the office of the Attorney general of Mexico City showed skulls clustered around the altar, which also had a cross behind it adorned with a Horned Wooden Facemask.

To the right of the altar, there was a painted wall full of signs and symbols, which also included a pyramid topped with a hand, celestial bodies and the head of a goat. In front of the wall there stood a variety of objects, which includes dozens of wooden sticks with colored markings.

The attorney general’s office spokesperson said that the authorities are still investigating the provenance of the skulls. In the course of the investigation, investigators have also discovered Knives, 40 Jawbones, the Fetus, and 30 Legs or Arm bones at the site, the office informed.

Tepito is located in the north of the capital’s historic center, has long been popularly known as the hotbed of illicit commercial activity.

Thus the release of almost all the suspects arrested after the raid from the hidden tunnels and suspected drug laboratories in Tepito is seen as a setback to the government, which has been struggling to get a grip on the chronic gang violence.

Meanwhile, on Sunday thousands of Mexicans took to the streets of the capital city to dance beside giant skulls and skeletons as Mexico City rolled out its fourth edition of a ‘Day of the Dead’ parade. Inspired by the Hollywood, the parade is a part of an ever-expanding menu of festivities scheduled for the holiday.

The city thus has been turned into various Hollywood blockbusters such as props from the opening scene of the 2015 James Bond film, ‘Spectre’, in which Daniel Craig’s title character dons a skull mask as he makes his way through the crowd of revelers.

Festivities in the Mexican capital have also expanded in recent years to capitalize on the growing interest of tourists in the holiday, with temporary art installations in public spaces and colorful weekend events. As another elaborate parade is scheduled on the city’s iconic Reforma Boulevard from November 2nd, as the day is celebrated as ‘All Souls Day’.

Sunday’s show ‘Day of the Dead’ featured enormous, brightly painted puppets in shapes like the Xoloitzcuintli, a hairless dog venerated by pre-Hispanic societies and dancers decked out like skeletons moving to the brass sounds of marching bands. Though many Mexican families have hosted ‘Day of the Dead’ affairs in the privacy of their homes or at cemeteries for many years.