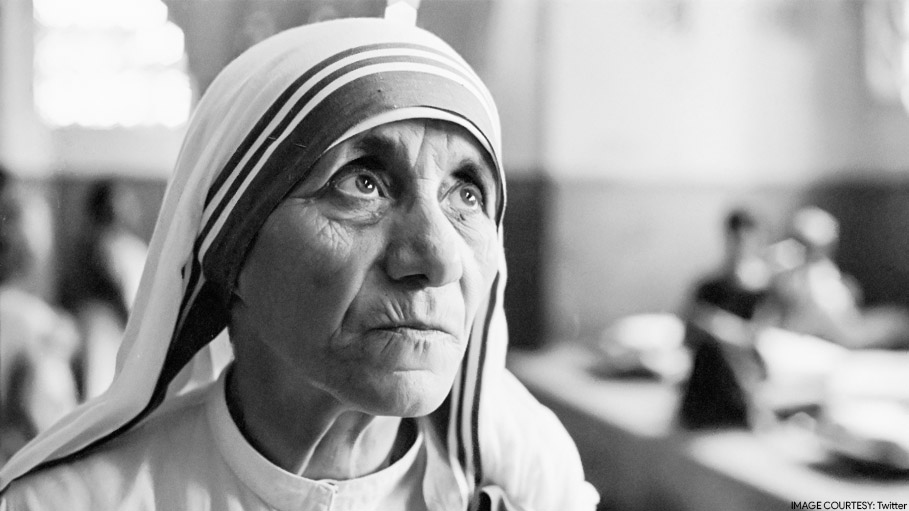 She left her home behind at the tender age of 18 and devoted her entire life serving humanity, trying to reach out to the most abandoned life, thriving on earth. She is Mother Teresa and today, her 109th birth anniversary is being observed.

Although globally this pious soul is known as Mother Teresa, she was born as Agnes Gonxha Bojaxhiu in 1910, which is her actual name.

Raised in an Albanian family, in the far off land of Skopje, North Macedonia, the virtues of life, like compassion, generosity and goodwill were imbibed in Agnes’ character.

Call of duty couldn’t confine her for long within those four walls. 18-year-old young Agnes had surrendered her entire self at the feet of Jesus Christ.

Mother Teresa in her youth

She joined ‘Sisters of Loreto’ in Ireland, however, moved to India later.

During her early years in Kolkata, Mother Teresa took up the teaching profession and worked as the geography teacher at the St. Mary’s High School, for 15 years.

It is during 1948, that she wanted to devote herself to a greater cause, serving the poor and the needy. So, in 1950 she founded Missionaries of Charity.

Mother Teresa was awarded the Nobel Peace Prize for her unparallel contribution towards society and humanity. But Mother expressed her heartiest desire to donate the prize money worth USD 192,000 to the welfare of the destitute.

Mother’s beloved soul left earth on September 5, 1997. And in 2017, the Vatican Pope declared her as the Patron Saint of Archdiocese of Calcutta by for selfless lifelong services and endless love towards all of us.

Till date, the sisters at the Missionaries of Charity are carrying ahead Saint Teresa’s legend by providing food, shelter and care to the ones who need those the most.

On Mother’s 109th birth anniversary, the Missionaries of Charity paid tribute to her soul, and a nun uttered, “Mother was not concerned about success, fame or power; she only belonged to Jesus. She served the poorest of the poor across the world and became the defender of the right to life for the unborn and challenged children, who were perceived as the burden to the society,”.
SEE ALSO:
Jim Carrey Paints Sarah Sanders and Gets Slammed on Twitter