Trevor Mallard, who fed the little boy from the speaker’s seat, while playing the role of the speaker listening to the debate as well as a babysitter. 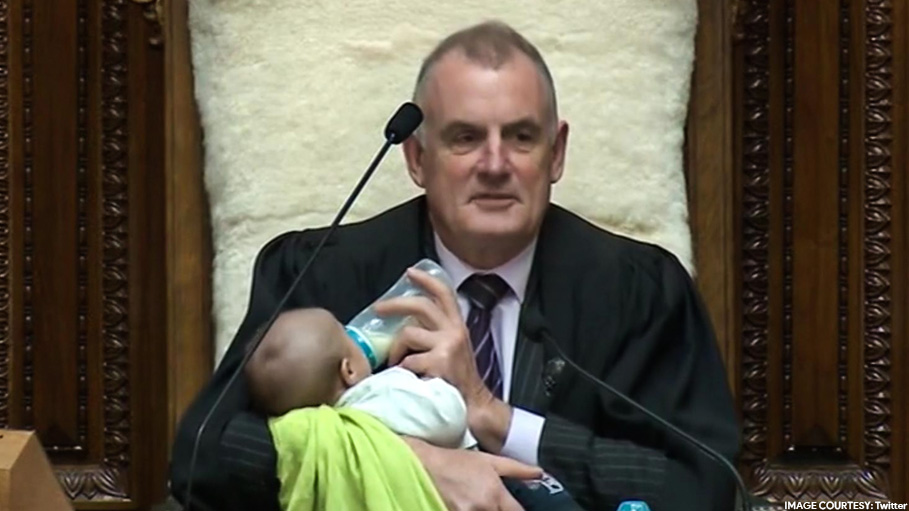 In an unprecedented move, Speaker of New Zealand’s parliament, Trevor Mallard cradled the baby of a lawmaker while presiding over a political debate, listening to the lawmaker’s speech as well as feeding the baby, in the House of Representatives, following the footsteps of babysitting by politicians across the world.

Mallard later took to Twitter to share a picture of himself feeding Member of Parliament Tamati Coffey’s baby boy, while sitting in the Speaker’s seat.

Along with the picture he also wrote, “Normally the Speaker’s chair is only used by Presiding Officers but today a VIP took the chair with me. Congratulations @tamaticoffey and Tim on the newest member of your family”.

In July this year lawmaker Coffey has announced the birth of his son, Tutanekai Smith-Coffey. The baby was born through a surrogate mother and is the biological son of Tamati Coffey’s partner, Tim Smith. In a tweet about the birth of the baby, Coffey then said he and his partner were “overwhelmed at the miracle of life”.

On Wednesday, Tamati Coffey attended a parliamentary debate with his baby for the first time since returning from the paternity leave. During the session, the representative for Waiariki handed over babysitting duties to father-of-three and Speaker of the Parliament, Trevor Mallard, who fed the little boy from the speaker’s seat, while playing the role of the speaker listening to the debate as well as a babysitter.

In the House of Representatives, the appearance of the baby has garnered the cross-party support. As Coffey later told the Media that he felt, “really supported by my colleagues from across the House”.

Green Party MP Gareth Hughes also shared a picture of Lawmaker Coffey holding his baby in the parliament, with a caption, “Lovely to have a baby in the House, and what a beautiful one @tamaticoffey”.

Tamati Coffey is the latest MP to bring his baby to parliament, following the example of politicians across the world. In the year 2018, Liberal Democrat leader Jo Swinson, attended a debate with her baby, while Australian Senator Larissa Waters, breastfed her baby in the parliament in the year 2017. They are among the legislators, who made headlines.

In September last year, the Prime Minister of New Zealand Jacinda Ardern also made history by bringing her baby to her debut speech at the United Nations in New York.