The resignation of Nikki Haley from UN is a big loss for US President Donald Trump too, as she is by far the most high profile woman in the cabinet and with an international presence. 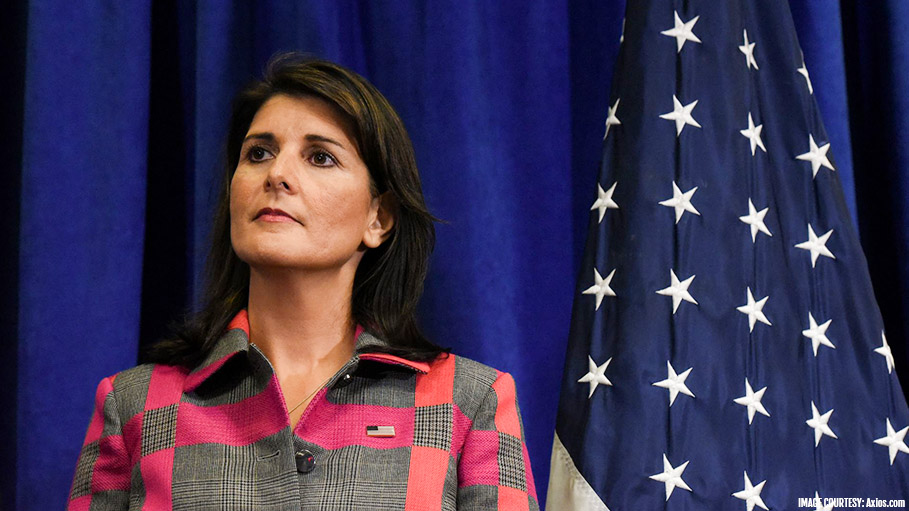 Nikki Haley has announced her resignation after nearly two years in the important position. US President Donald Trump along with Ms. Haley appeared in his Oval Office, to declare her departure and to say before the world, that she had done “an incredible job”.

Though the 46-year-old Nikki Haley, who is also a former South Carolina governor and one of the few powerful women in the Trump cabinet, gave no reason for her resignation. She has at the same time dismissed the speculation that she is planning to run for the Presidential election in 2020. Meanwhile, Donald Trump said that he would name a replacement very soon within two weeks.

Trump said he would consider Dina Powell, his former deputy Security Council adviser for the position and also said that his daughter Ivanka “would be dynamite”, as ambassador to UN, but he also acknowledges that he would be accused of nepotism by his opponents if he chose her. Ivanka too ruled herself out of the race by tweeting a clarification.

Though Nikki Haley did not give much detail about her resignation or what she is planning to do next. She said, “It’s been eight years of intense time, and I’m a believer in term limits, she said referring to her time in public office. I don’t have anything set on where I'm going to go”.

The President meanwhile said, “she has been very special to me, she has done an incredible job, she is a fantastic person, very importantly, but she is also somebody that gets it. Hopefully you'll be coming back at some point, right”, Haley laughed and reacted by saying “Maybe a different capacity, you can have your pick”.

The resignation of Nikki Haley from UN is a big loss for US President Donald Trump too, as she is by far the most high profile woman in the cabinet and with an international presence. She has done much to protect the United Nations from Donald Trump’s spats and comments.

She was a strict critic of Russia and Syria at the UN and also fiercely critical of what she claimed was the global body’s anti-Israel’s bias. Nikki Haley played an important role in pressuring China to support tough sanctions against North Korea.

Nikki Haley was also a frequent critic of US President Donald Trump during his election campaign. During that, she had said that the women who accused Trump of sexual assault “should be heard”. At one point she also suggested that Donald Trump’s rhetoric could trigger a world war.