Nissan’s ProPILOT Golf Ball Turns Every Driver into a Pro

Similar to the Skyline’s ProPILOT 2.0 advanced technology, the ProPILOT golf ball supports golfers by following a predefined route to its goal. Players can feel confident that they will reach their target effortlessly on each putt. 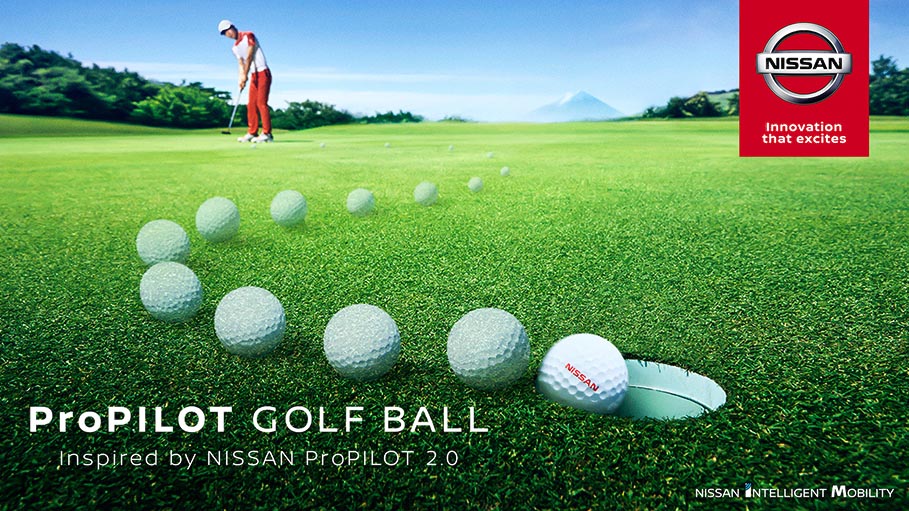 Nissan Motor Co, a global leader in full-line vehicle manufacturing, selling more than 60 models under the Nissan, INFINITI and Datsun brands, has now taken the dreaded “putting nerves” out of golf with its latest innovative concept, the ProPILOT golf ball. The concept is inspired by Nissan’s ProPILOT 2.0 driver assistance technology, set to debut on the new Nissan Skyline next month in Japan. Designed for the on-ramp to off-ramp (ramp-to-ramp) highway driving1, ProPILOT 2.0 engages with the vehicle's navigation system to help maneuver the car according to a predefined route on designated roadways. The system is the first in the world to combine this with hands-off driving capability while cruising in a single lane-2.

Similar to the Skyline’s ProPILOT 2.0 advanced technology, the ProPILOT golf ball supports golfers by following a predefined route to its goal. Players can feel confident that they will reach their target effortlessly on each putt. Using technology influenced by Nissan Intelligent Mobility – the company’s vision for how cars are powered, driven and integrated into society – the ball navigates its way across the green and into the cup on the first putt, providing a stress-free golf experience.

An overhead camera detects the position of the ball and cup. When the ball is hit, a monitoring system calculates the correct route based on the ball’s movement and adjusts its trajectory. Combining sensing technology with an internal electric motor, the ProPILOT golf ball stays on the route until reaching the cup – making even novice golfers, of all ages, feel like pros.

Interestingly, last year, the Yokohama (Japan)-headquartered company sold 5.52 million vehicles globally, generating a revenue of 11.6 trillion yen. Nissan manages its operations across six regions, namely: Asia & Oceania, Africa, the Middle East & India, China, Europe, Latin America and North America. The leading premier automaker has teamed up with French manufacturer Renault since 1999 and acquired a 34 percent stake in Mitsubishi Motors in 2016. The alliance of Renault-Nissan-Mitsubishi sold as many as 10.76 million vehicles together in the calendar year 2018.

Nissan’s ProPILOT golf ball is the latest in a series of concepts inspired by Nissan Intelligent Mobility technologies. Previous examples include the Intelligent Parking Chair, the ProPILOT Chair and the ProPILOT Park Ryokan (featuring self-parking slippers).

Visitors can practice their golf swing with the ProPILOT golf ball from Aug. 29 through Sept. 1 at the Nissan Global Headquarters Gallery in Yokohama. The demonstration is available from 10 a.m. to 8 p.m.

2) The hands-off feature is not available on roads that have two-way traffic, in tunnels, on winding roads, in tollgate areas, merging lanes, or areas with a decreasing number of lanes, and in areas where manual control is required. When entering a road section, where hands-off driving is not available, the system will send an alert to the driver, well in advance, so that the driver can take manual control of steering.