South Korea’s Joint Chiefs of Staff confirmed the firing. An official from the department said that North Korea fired the two missiles just after dawn and they flew a distance of around 430 kilometres (260 miles) before falling into the East Sea. 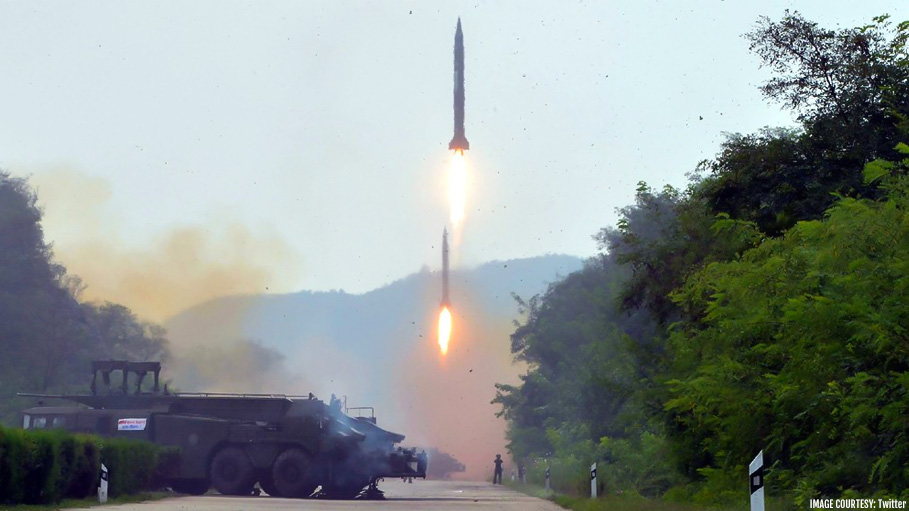 Kim Jong-un seems to be reluctant in his moves, even after his meeting with the US President Donald Trump earlier this month and promise of restraint, North Korea has fired two short-range missiles into the sea on Thursday. This is seen as a warning from Pyongyang over the military exercises between Washington and Seoul that is scheduled to take place, next month.

North Korea also warned that the war games could affect their planned resumption of denuclearisation talks, which took place between Washington and Pyongyang.

South Korea’s Joint Chiefs of Staff confirmed the firing. An official from the department said that North Korea fired the two missiles just after dawn and they flew a distance of around 430 kilometres (260 miles) before falling into the East Sea, which is also known as the Sea of Japan. The official referring to the North Korean leader also said, “It is not clear whether Kim Jong-un oversaw the launch on site”.

Japan meanwhile confirmed that the missiles did not reach Japanese waters, but Japan’s defense minister said that the move of North Korea is “extremely regrettable”. Defence Minister Takeshi Iwaya said, “We have confirmed so far that they did not reach our country’s territory or exclusive economic zone”.

According to Cheong Seong Chang, an analyst associated with Sejong Institute, “The action should be considered part of Pyongyang’s protest against the upcoming US-South Korea military drill next month”.

But other analysts are of the view that North Korea’s opposition to the drills is merely a pretext, as Pyongyang wants to pursue its weapons ambitions.

Hong Min, a Researcher associated with Korea Institute of National Unification, South Korea says, “I think the launches are part of a larger plan for North Korea’s advanced missile programme, rather than its protest against the upcoming military drill”.

On May 9th, Pyongyang last fired short-range missiles, which US President Donald Trump has called “very standard stuff” but at the same time, he also said that it had not affected his relationship with the North’s leader Kim Jong-un.

After months of standoff, Kim and Trump agreed to resume their talks after an impromptu meeting on June 30 that they held in the Demilitarized Zone that divides the two Koreas. Following the meeting, US Secretary of State Mike Pompeo also indicated that the working-level talks would start by mid-July.

But in an unprecedented move last week, North Korea issued a warning over the military drills between South Korea and the United States, which have been held for years and were scaled down to ease tensions with the nuclear-armed state.

North Korea last week condemned the exercises saying it as a “blatant pressure and a violation of the spirit” of the joint statement issued and signed by US President Donald Trump and Kim Jong-un, at their first summit held in Singapore last year.

Earlier, North Korea has hinted it could reconsider its suspension of nuclear testing because of the military drills, although the US State Department was confident and upbeat over the commitments made by Kim and Trump during the recent DMZ meeting and at a February summit in Vietnam.