Pierce Brosnan has been interrogated by the authorities of Indian capital, Delhi for promoting Pan Bahar, Indian mouth freshner. The American star told the authorities that he has been “cheated” by the Indian Mouth Freshner brand - Pan Bahar. 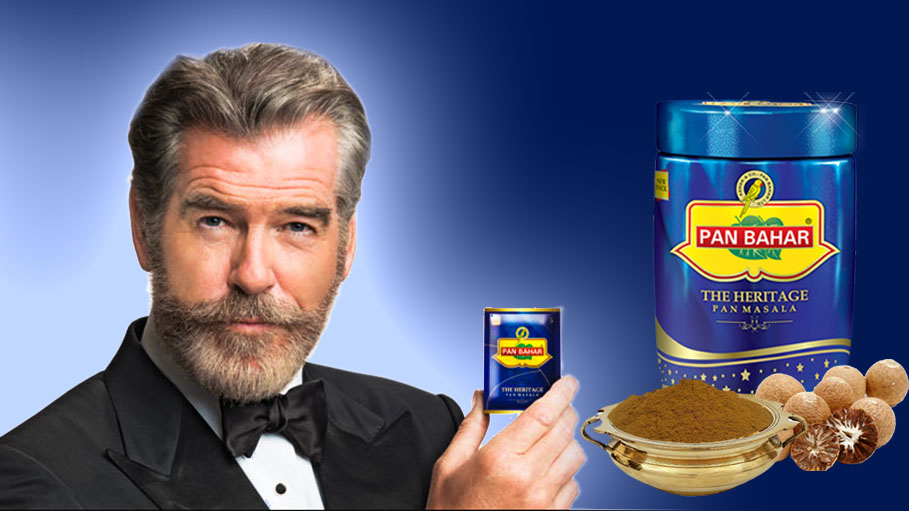 Pierce Brosnan has been interrogated by the authorities of Indian capital, Delhi, for why he agreed to promote a product that has addictive form of tobacco as an ingredient. The American star told the authorities that he has been “cheated” by the Indian Mouth Freshner brand - Pan Bahar.

You all have seen it! The former ‘James Bond’ of silver screen appeared in an Indian advertisement promoting a mouth freshner brand - Pan Bahar, first in 2016. Take a look at the full Pan Bahar ad video here -

Pierce Brosnan gets featured in the ad in a typical ‘Bond’ like avatar, flirts with beautiful women, knocks down opponents and finally becomes the ‘hero’. And guess what? All these are made possible with a few kisses, from Brosnan’s lips to the Pan Bahar container. And Voila! Brosnan wins the ‘Hotseat’.

In a nutshell, the coolest and suavest men chew Pan Bahar! Unfortunately, things are not turning that ‘cool’ for the ‘Bond’ star.

The Pan Bahar advertisement by Pierce Brosnan had got mixed reactions. Whereas some have simply enjoyed it, few are not taking it lightly. Several questions have been fired towards Brosnan, as how on earth such a big Hollywood star is promoting a mouth freshening product that has cancer causing possibilities.

According to Pierce Brosnan’s statement, he has been “cheated” by the mouth freshner manufacturing company Ashok & Co. A Delhi official said, the company didn’t inform Brosnan about the product harms. In fact, he was in agreement to promote a single product which is a mouth freshner/teeth whitener, not something that contains Tobacco, Brosnan told People’s Magazine.

On the other hand Ashok & Co. told the BBC that there was no tobacco in the product, back in 2016. No reaction has been received from them thereafter.

The entire scenario is giving rise to confusions and a number of questions.

The whole Indian territory knows Pan Bahar as a mouth freshening mixture of betel nut, tobacco, lime, catechu, cardamom seeds, sandalwood oil, kewara and other flavouring substances. Awareness campaigns against tobacco and gutka are constantly being aired on Indian television and at cinemas. They how did Ashok & Co. deny the tobacco ingredient fact? Why the officials have only interrogated Brosnan, and not the company as well? There are no answers yet!

However, Pierce Brosnan has assured the Delhi authorities that his agreement with Ashok & Co. is over and he has agreed to help the country officials against any similar campaign in future.