The vast museum will be inaugurated in a glittering ceremony in the presence of royals. 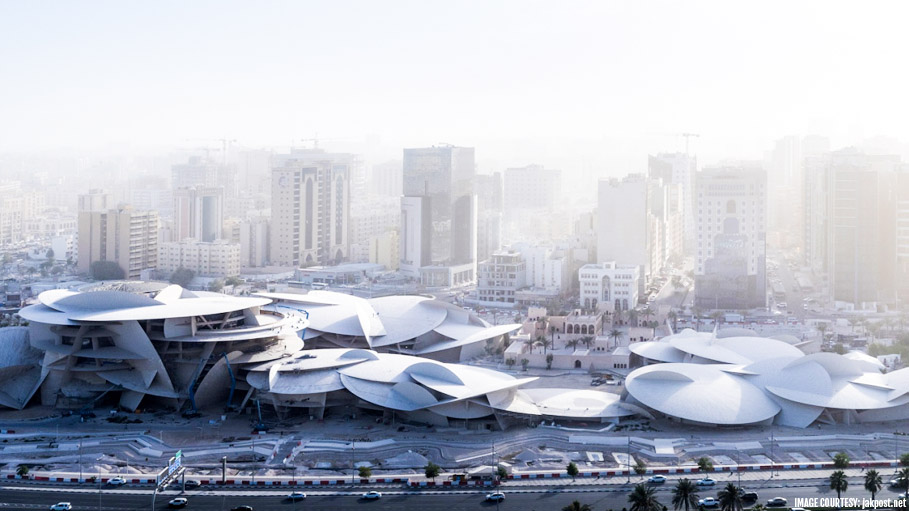 Qatar’s National Museum built in the shape of a desert rose, at an estimated cost of $434 million in 10 years is finally ready to open.

The vast museum will be inaugurated in a glittering ceremony in the presence of royals which include Qatar’s ruler Sheikh Tamim bin Hamad al-Thani, Kuwaiti Emir Sheikh Sabah Al-Ahmad Al-Jaber Al-Sabah and French Prime Minister Edouard Philippe this Wednesday. The doors of the museum will be open to the public the next day.

The pale beautiful futuristic 52,000-square meter structure is located on Doha’s waterfront Corniche. The National Museum is among the increasing list of picturesque buildings in Qatar, which includes the newly opened national library and Museum of Islamic Art.

The country, which is being built, rebuilt and has been utterly transformed for the 2022 football World Cup. The national museum is going to be the single most eye-catching design of all the new buildings in Qatar. It is going to be the first landmark building, visitors coming to Qatar are going to see this beautiful structure, as they make their way from the airport to the city centre.

The entrance of the ‘Desert Rose’ includes 114 fountain sculptures in a 900-metre long lagoon and the museum has a multi-curved roof, which resembles a giant jigsaw puzzle and that is made of 76,000 panels in 3,600 different shapes and sizes.

Inside, the museum there is a gallery space of more than 1,500 metres, where among the exhibits is a 19th-century carpet embroidered with 1.5 million Gulf pearls and the oldest Koran discovered in Qatar, also dating back to the 1800s.

Sheikh Amna Bint Abdul-Aziz bin Jassim al-Thani, Director of the Museum said, “This is a museum that narrates the story of the people of Qatar”.

The National Museum stands on the site, which was once the palace of Sheikh Abdullah bin Jassim al-Thani, who is regarded as the son of the founder of modern Qatar. The palace has also been restored as part of the massive museum project.

The Museum, also celebrates Qatar’s Bedouin past and energy-rich present. It also reflects the country’s confidant present with massive wealth and ambition.

The national museum is also the latest in the cultural “arms race” and soft power course among the Gulf nations, which also includes Nouvel’s Louvre in Abu Dhabi which was opened amidst huge fanfare in 2017, designed to show-off the progressive aspects of the various competing emirate states.

Now Qatar’s National Museum, which was originally scheduled for opening in the year 2016, delayed by a year, has given it a chance to reinforce its national identity from the other Gulf States.

Since June 2017, the neighbouring former allies, including Saudi Arabia and the UAE, have accused Qatar of supporting terrorism, thereby blocking it diplomatically and economically. Though Qatar rejects all these charges and says the blockade is an attack on its sovereignty. The bitter dispute has fractured long-standing Gulf alliances, but the new museum will now allow Qatar to reinforce its separateness from its rivals.