Princess Eugenie stands ninth in the line to the throne. Her grandmother, the Queen and Prince Philip, along with other members of the Royal family, witnessed the marriage. 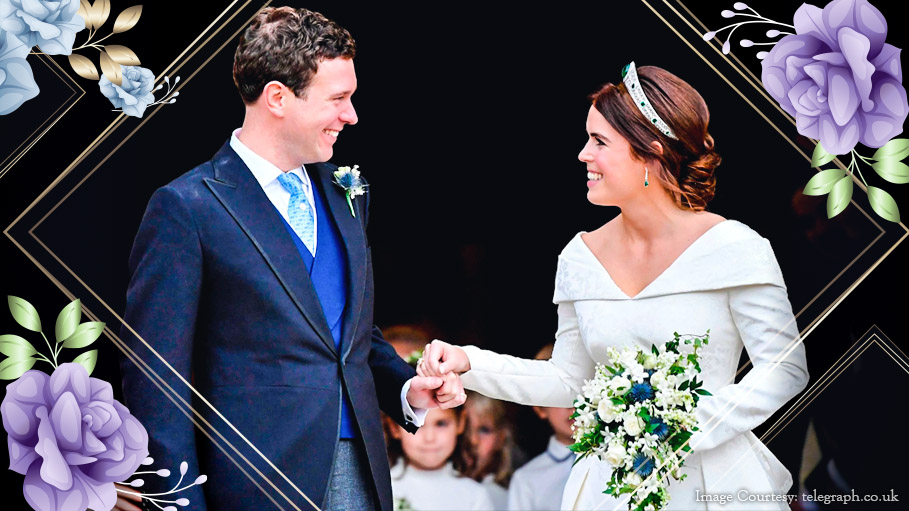 Princess Eugenie has finally married her longtime partner Jack Brooksbank at St George’s Chapel in Windsor Castle in what is called the second Royal Marriage this year after the wedding of Prince Harry and Meghan Markle. Princess Eugenie stands ninth in the line to the throne. Her grandmother, the Queen and Prince Philip, along with other members of the Royal family, witnessed the marriage.

The Duke and Duchess of Cambridge and the Duke and Duchess of Sussex also attended the service. Mother of the bride Sarah, Duchess of York sat along with her eldest daughter, Eugenie's sister, Princess Beatrice all through the wedding ceremony. Princess Eugenie, the 28-year-old daughter of Prince Andrew, was full of smile throughout the ceremony. She wore a full-length train, which was designed by Peter Pilotto and Christopher De Vos, who are the famous founder of British label Peter Pilotto. She also wore the Queen’s Greville Emerald Kokoshnik Tiara, made in the year 1919 by Boucheron which features brilliant and rose cut diamonds, pave set in platinum, with six emeralds on either side of the tiara.

In the wedding, the Duke and Duchess of Cambridge’s children, Prince George and Princess Charlotte, acted as pageboy and bridesmaid. Eugenie’s sister, Princess Beatrice, was maid of honour and Brooksbank chose his brother, Thomas, as best man.

After the wedding, the couple travelled by carriage from St George's Chapel into Windsor, before heading for an afternoon reception hosted by the Queen in St George's Hall at the castle. Nearly 3,000 people gathered to cheer Princess Eugenie and her new husband.

Eugenie and drinks executive Brooksbank, met while skiing in Switzerland in the year 2010. In the evening the couple left the castle in a silver DB10 Aston Martin, which was originally made for the James Bond movie Spectre towards Royal Lodge, the York family home in Windsor Great Park, for the evening reception.