Russia confirmed on Friday that it carried out an air strike on Kyiv during a visit by the UN's secretary general, the first such attack on the Ukrainian capital in nearly two weeks, and in which a journalist also died. 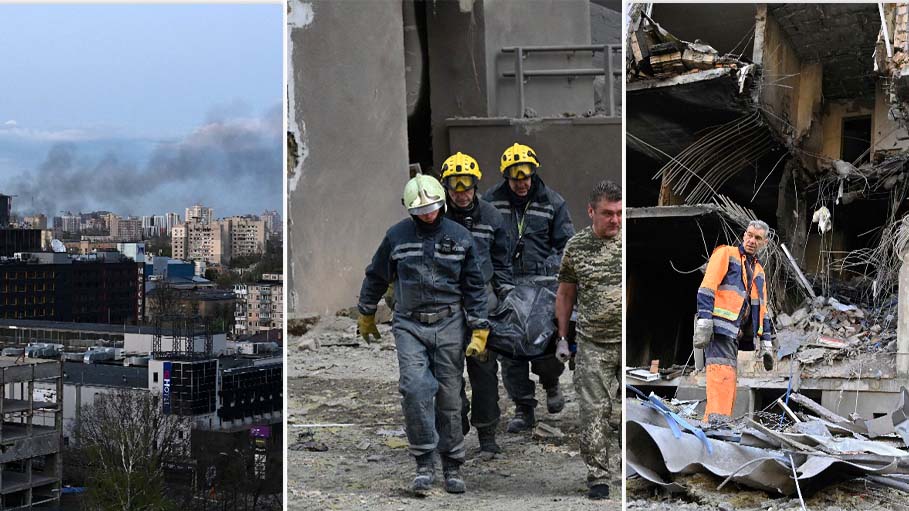 Moscow: Russia confirmed on Friday that it carried out an air strike on Kyiv during a visit by the UN's secretary general, the first such attack on the Ukrainian capital in nearly two weeks, and in which a journalist also died.

Vera Gyrych, a producer for the US-funded Radio Free Europe/Radio Liberty, was killed when a Russian missile hit the building where she lived in Kyiv, the media group said.

Russia's defence ministry said it had deployed "high-precision, long-range air-based weapons" that "destroyed the production buildings of the Artyom missile and space enterprise in Kyiv".

Ukraine's President Volodymyr Zelensky said the strikes, which immediately followed his talks with UN chief Antonio Guterres, were an attempt by Russia "to humiliate the UN and everything that the organisation represents".

Earlier that day, Guterres had toured Bucha and other Kyiv suburbs where Moscow is alleged to have committed war crimes. Russia denies killing civilians.

The powerful blast had ripped out walls and doors, leaving piles of rubble on the ground.

"I think Russians aren't afraid of anything, not even the world's judgement," Anna Hromovych, deputy director of a heavily damaged clinic, told AFP as she and others were cleaning up the devastation on Friday.

Ukrainian prosecutors said they had pinpointed more than 8,000 war crimes and were investigating 10 Russian soldiers for suspected atrocities in Bucha, where dozens of bodies in civilian clothes were found following Moscow's retreat.

Britain said it would send a team of war crimes experts in May to help Ukrainian investigators.

Three months into an invasion that failed in its short-term aim of capturing Kyiv, Russia is now intensifying operations in the eastern Donbas region and tightening its stranglehold on the devastated southern port city of Mariupol.

Ukrainian authorities said they planned to evacuate civilians on Friday from the besieged Azovstal steel plant, the last holdout in Mariupol where hundreds of civilians are sheltering with Ukrainian troops.

But Denis Pushilin, The leader of the breakaway eastern region of Donetsk, accused Ukrainian forces of "acting like outright terrorists".

He said Ukraine was holding civilians hostage in the steel plant, claiming that people were free to leave any time.

With the war claiming thousands of lives, Kyiv has admitted Russian forces have captured a string of villages in the Donbas region.

A senior NATO official said Russia had made only "minor" and "uneven" advances in their attempt to encircle enemy positions as Ukrainian forces counter-attacked.

A Pentagon official on Friday said the Kremlin's eastern offensive was "behind schedule" as air strikes were failing to facilitate lightning ground offensives.

In the region of Kharkiv, Ukrainian forces said they had recaptured a "strategically important" village, Ruska Lozova.

But in Kharkiv, Ukraine's second city, civilians continued to live in fear.

One resident, Antonina, told AFP she returned home to find a rocket had smashed through her building and lodged in her bathroom.

"When I came home, everything was destroyed... It was scary," she told AFP.

More Western armaments are due to arrive in Ukraine, with US President Joe Biden on Thursday seeking billions of dollars from Congress to boost supplies.

A senior US official said the package would keep Ukraine's government and military going through to the start of October.

Britain said it was deploying about 8,000 troops for exercises across eastern Europe in a show of Western allies' resolve against Russian aggression.

Fears of the conflict spilling over into neighbouring Moldova's pro-Kremlin breakaway region of Transnistria have soared this week after explosions, shots and a drone sighting were reported.

"I don't know what to do, I've never lived through a situation like this," Victoria, a 36-year-old medical assistant who works in Transnistria, told AFP.

"If things change we will leave, obviously."

A NATO official said the presence of 1,500 to 2,000 Russian troops in Transnistria was a "concern" as they could distract Ukrainian forces and had stronger capabilities than Moldova's army.

The cost of the war has reverberated across Europe, with Brussels publishing data showing that output growth for the eurozone has slowed to 0.2 percent, while consumer prices have leapt by a record 7.4 percent in April.

But that pales in comparison to the plight of Ukrainians, more than 5.4 million who have fled their country since the invasion, according to UN estimates.

Another 7.7 million others are displaced internally, the International Organization for Migration said, appealing for $514 million to help.

"We're left with only one hope: to return home," said pensioner Galina Bodnya in the southern city of Zaporizhzhia.

US Says Russia May Use "Chemical Agents" in Ukraine