Russian strikes slammed into central Kyiv Thursday as Antonio Guterres was visiting, shocking the UN chief and wounding 10, in the first such rocket attack on the capital since mid-April. 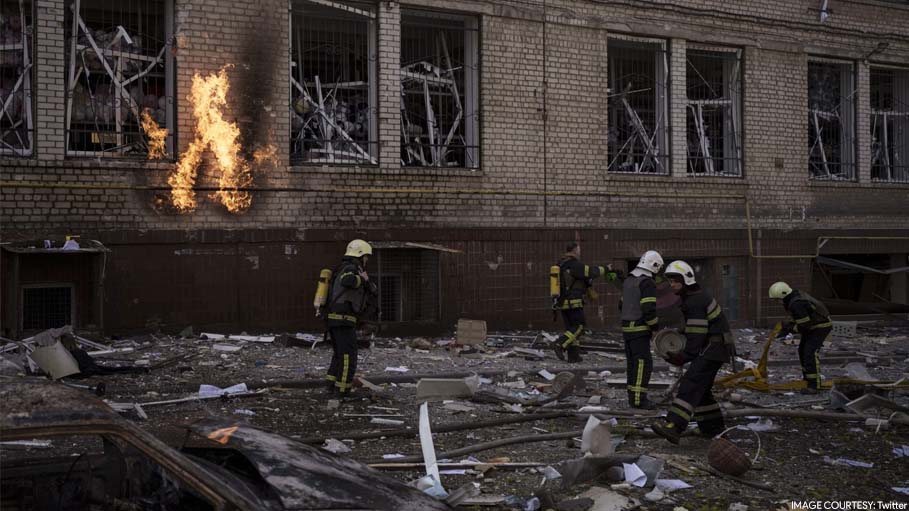 Kyiv: Russian strikes slammed into central Kyiv Thursday as Antonio Guterres was visiting, shocking the UN chief and wounding 10, in the first such rocket attack on the capital since mid-April.

A loud blast rocked the Ukrainian capital at around 1715 GMT, sending emergency vehicles scrambling towards a residential area in the western part of the centre in an attack that shook the UN chief and his team.

The emergency services said one strike hit a 25-storey residential block, partially destroying two floors, while AFP correspondents also saw a low-rise building in flames, with black smoke pouring into the air and rescuers at the scene.

Twelve fire trucks were called in to put out the blaze, with rescuers confirming 10 people were wounded in the strikes, raising an earlier toll of three.

Kyiv mayor Vitali Klitschko said there had been "two hits in the Shevchenkovsky district", one of which struck "the lower floors of a residential building".

The UN team were shaken by the attack but a spokesman confirmed all of them were "safe".

"It is a war zone but it is shocking that it happened close to us," Saviano Abreu, spokesman for the UN's humanitarian office told AFP, without saying how near they were to the point of impact

The attack took place less than an hour after Guterres and Volodymyr Zelensky held a joint press conference some 3.5 kilometres (2 miles) from the point of impact.

"Today, immediately after the end of our talks in Kyiv, Russian missiles flew into the city. Five rockets," said Zelensky.

"This says a lot... about the Russian leadership's efforts to humiliate the UN and everything that the organisation represents."

He added that it required "a correspondingly powerful reaction".

His foreign minister Dmytro Kuleba denounced it as a "heinous act of barbarism" while Defence Minister Oleksiy Reznikov said it was "an attack on the security of the Secretary General and on world security".

The strikes came just two days after Guterres held talks in Moscow with Vladimir Putin, the Russian leader telling him he remained hopeful that negotiations could end the conflict.

The irony of the timing was not lost on Mykhaylo Podolyak, a senior Zelensky aide.

"Missile strikes in the downtown of Kyiv during the official visit of @antonioguterres. The day before he was sitting at a long table in the Kremlin, and today explosions are above his head," he tweeted.

Earlier, on his first visit to Ukraine since Russia launched a full-scale invasion on February 24, Guterres toured several towns and villages near Kyiv where Russian forces are accused of killing civilians.

"War is an absurdity in the 21st century. The war is evil," he said after visiting places including Bucha where dozens of bodies in civilian clothes were found, some with their hands bound and others buried in shallow graves.

Later at the news conference with Zelensky, Guterres admitted the Security Council had failed to go far enough in its efforts to "prevent and end" Russia's war in Ukraine.

"Let me be very clear: the Security Council failed to do everything in its power to prevent and end this war. And this is the source of great disappointment, frustration and anger," he said.