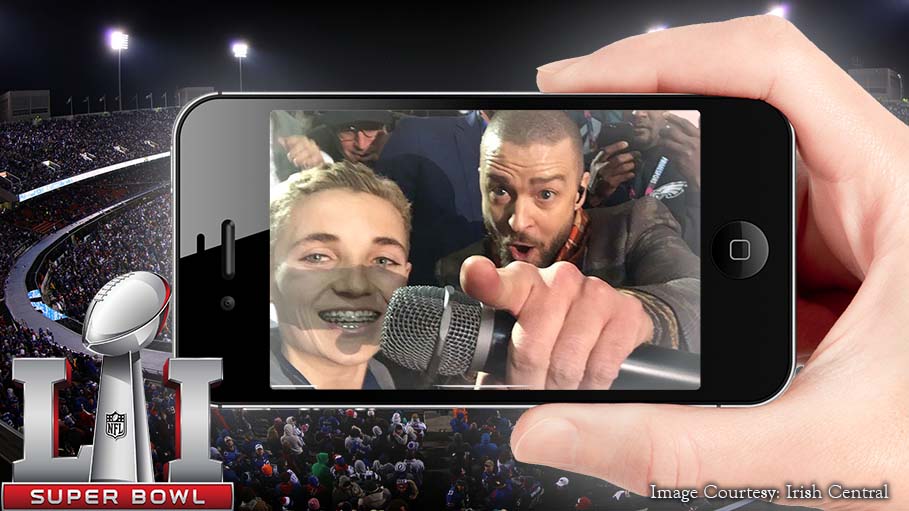 The Super Bowl halftime show is known to create some iconic moments. This year, thirteen year old Ryan McKenna stole the show and became the center of attraction of the event. He took an iconic selfie with Justin Timberlake that went viral on twitter. It was not the selfie, although the manner it was smoothly clicked by the smart teenager, was what grabbed everyone’s attention.

The young teenager looked baffled when Justin Timberlake came up and began dancing next to him. Ryan McKenna was on camera and his emotions were quite conspicuous to viewers. The young teenager’s expressions appeared too innocent and cute. From the video, it appeared that the kid didn’t know how to react when the great singer was seen dancing next to him. So, as an act of defense he turned to his cell phone and started fiddling with it.

The boy caught the attention of the internet. Soon they created a list of memes of the kid that caught the attention of online viewers worldwide. Ryan Mckenna later had to explain to the local Minneapolis newspaper the Twin Cities Pioneer that he didn’t want to miss the opportunity of taking a selfie with the icon when he saw Justin Timberlake walk up towards him. He was recording a video, however he had to stop recording and he hurried to open the camera app of his phone.

“I just thought to myself, ‘I’ll never get this opportunity again in my whole life,'” he said. “I just went for it.”

He even danced to the beat with Justin Timberlake. Later, while Justin was engaged with the crowd nearby, it appeared that Ryan McKenna geared up to click a selfie with the singer.  As soon as the song got over, Ryan was seen taking a selfie with Justin. And that was it. His wish came true.  Not only did the young tennager get himself an iconic photo with Justin Timberlake, he also created the biggest viral Superbowl moment.

At the end of the selfie, Justin Timberlake appropriately shouted out “Superbowl Selfies” into the mic. Ryan McKenna and his father John McKenna had flown in from Massachusetts to attend the Super Bowl game. They were about to fly back on Monday, however there may be change in plans due to the huge media interest on the Super Bowl viral moment.  “It’s been so crazy,” McKenna said. “I don’t even know what to think. All my friends have been texting me and stuff. It’s insane.”