Secret Tape Involving US President Donald Trump is Made Public

The revealed tapes also prove that Trump had knowledge about the hush money being paid on his behalf, which he has been denying, during the election campaigns and afterwards. 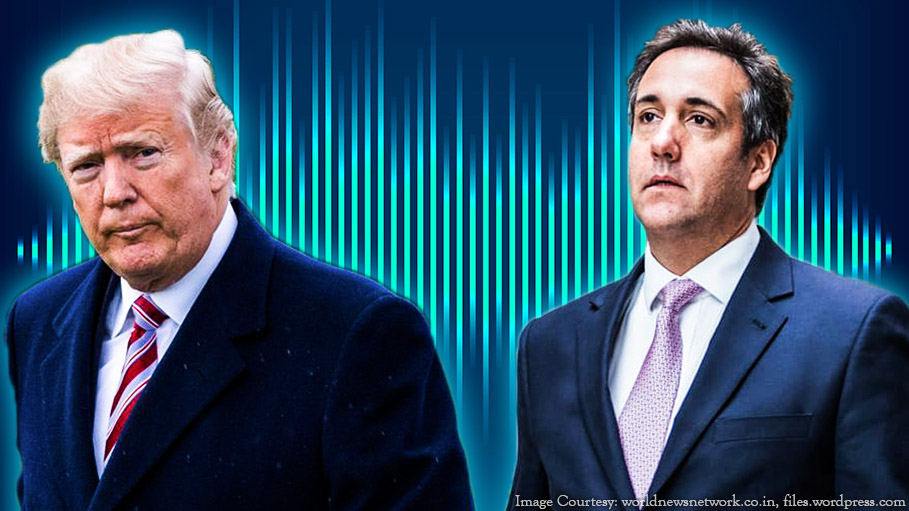 Michael D. Cohen, the former lawyer of US President Donald Trump has released a secret tape recently, which reveals his discussion with the President, where both of them are heard, discussing money to be paid indirectly to a former Playboy model who had a relationship with Trump.

The revealed tapes also prove that Trump had knowledge about the hush money being paid on his behalf, which he has been denying, during the election campaigns and afterwards. The tape also provides details of payments to the former model, Karen McDougal. Though it is not clear whether President Trump is directing Cohen to make the payment in cash or by cheque. The conversation between the two occurred, just two months before the 2016 US Presidential election.

In the tape, Cohen is heard informing Trump that he will need to set up a company to arrange for the payments.

Trump then asked, "What financing?"

Trump then appears to say, "Pay with cash."

The word cheque is uttered, but it is not clear by whom, as by that time the audio gets cut off.

Former model, Karen McDougal was paid $150,000 by The National Enquirer for her story in summer 2016, but the tabloid did not publish the story, because of its close proximity to President Donald Trump.

According to experts and people close to Trump and Cohen, on the tape both the men were discussing a second payment to be paid to The Enquirer, which would assure him to keep McDougal from speaking publicly about her relationship with President Trump.

After the release of the tape when asked by media, Rudolph Giuliani, Trump's lawyer said, “the tape would prove “exculpatory”, indicating that the conversation was the first time that US President Donald Trump had heard about the deal between McDougal and American Media Inc., the publisher of The Enquirer.

President Donald Trump took to Twitter to express his outrage on Cohen’s action, he wrote, “What kind of a lawyer would tape a client? So sad! Is this a first, never heard of it before? Why was the tape so abruptly terminated (cut) while I was presumably saying positive things? I hear there are other clients and many reporters that are taped - can this be so? Too bad”.

The president also questioned the abrupt ending of the recording, suggesting the tape was cut off before the president started talking about positive things.

The federal investigative agency, which is investigating Cohen’s case, has revealed that they are in possession of 12 audio recordings, which are seized during raids at Cohen's office, home, and hotel room.

Playboy Model Karen McDougal, who was the Playmate of the Month in December 1997 and Playmate of the Year in 1998, has alleged that she had a 10-month intimate romantic affair with Donald Trump in the year 2006. After staying silent for more than a decade, she started speaking about their relationship from the beginning of this year.