The Supreme Court announced that consensual same-sex relationships are not a criminal offense. 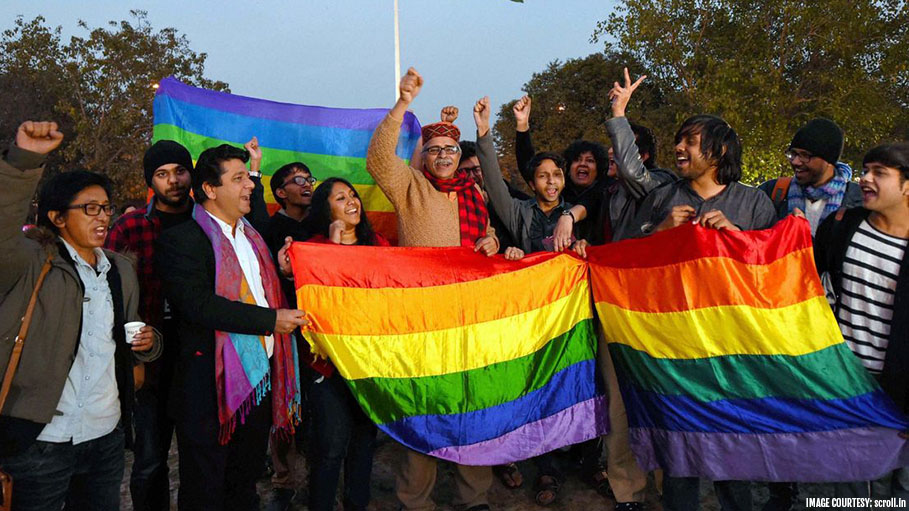 The verdict was on hold since 2013. In 2009, the Delhi High Court gave consent to same-sex relationships between consenting adults when a petition was filed by the Naz Foundation. The government said that the homosexual population is only 0.3 percent in India and mentioned that the right of 99% cannot be compromised for such a minority section. In December 2013, the verdict was left to the two-judge panel of the Supreme Court. The judgment passed by Delhi HC was overruled by the Supreme Court of India and recriminalized same-sex intimacy, saying that until the Parliament decides to amend or repeal the Section 377 the judgment cannot be passed by the judiciary. The NGO Naz Foundation once again filed a petition for review. This year in January, by giving light to the right to privacy as a fundamental right, the petition that challenged Section 377 was assigned to the five-judge constitution bench.

The five-judge bench was headed by Dipak Mishra- the Chief Justice of India. Along with him, there was Justices A M Khanwilkar, R F Nariman, Indu Malhotra, and D Y Chandrachud. The verdict was given over five petitions that were raised by hoteliers Aman Nath and Keshav Puri, dancer Navtej Jauhar, business executive Ayesha Kapur and journalist Sunil Mehra.

Earlier in July, the Chief Justice of India said that consensual acts are the only concern. He said, "We are only on consensual acts... Consent is the fulcrum... Your enjoyment cannot offend the dignity of others." Such statements had hopes high on today’s verdict going on the favor of same-sex relations.

Today the country was waiting for the verdict since morning 10.30 when the initial proceedings began. All the five judges gave their verdict individually and then it was found that the judgment was unanimous.

The verdicts that were given by the justices and CJI

CJI Dipak Mishra said that no social morality can be allowed to permeate the rule of law. Constitutional morality is the ultimate fact and sexual orientation is a natural phenomenon. As per the constitution, the fundamental right does not discriminate on the basis of sexual orientation, and the judgment is not against the fundamental right. Both CJI and A M Khanwilkar agreed on the fact and said that social morality cannot violate the rights one have as a single individual by the Constitution of India.

Justice Nariman referred to the Mental Healthcare Act, 2017 while giving the judgment. He said that the Parliament does not see homosexuality as a disease. He said that the homosexuals have the right to live their lives with dignity and honor. The societal stigma over them should not be there. He also asked the government to raise awareness with proper publicity to put a light on the fact that they are a part of the society and that way the stigma will be removed from the minds of the people.

Justice Chandrachud says that decriminalizing Sec 377 is the basic step. As per his words, the concept of human sexuality is not a “binary formulation”. He said that the medical community should be sensitive towards the right of the LGBTQI community. He also clearly mentioned that it is not a disease that needs a treatment to reform. He also mentioned that Section 377 as an 'anachronistic colonial law' that is confining a minority group and its right as an individual. The law was till now based upon gender stereotypes which were deep-rooted and thus took time for upheaval. He said in one of his statements, "Who decides what is natural and what is unnatural? Can the state be allowed to decide? Denial of the right to sexual orientation is the denial of privacy rights."

Justice Indu Malhotra was the only woman on the judicial bench and she admits that the history owes an apology to the community that was so long denied their basic rights. She also said that it took a lot of time to ensure that the community gets their right. She said that the governance of a criminal act will be continued if it is not a consensual sexual act, bestiality, and carnal intercourse with minors.

The whole country rejoices with the decision and the tweets of appreciation keep flowing from notable personalities of the country.

The history of Section 377

The criminalization of homosexuality was first enforced by the British in 1861. Section 377 of the IPC, which originates from this conviction, manages "unnatural offenses" and expressed that whoever intentionally has bodily intercourse against the order of nature with any man, lady or creature will be rebuffed with detainment forever, which may stretch out to ten years, and will likewise be at risk to fine.

In July this year, the Supreme Court held a four-day hearing on a clump of petitions testing this pilgrim period law.

The apex court mentioned that during the hearing, it would just manage the topic of the legitimacy of Section 377 — whether gay sex was a criminal offense — and would not dive into the issue of marriage in the LGBTQI gatherings or the possibility of inheritance when they are in a live-in relationship. Thus this verdict has left the doors open for many other concurrent decisions. The questions of marriage, inheritance, and adoption are still left unanswered and the community is expected to raise the issues in the coming days.