The name of Indian scientist Sir Jagadish Chandra Bose has been featured in the nomination list, once selected it will go into print from 2020. 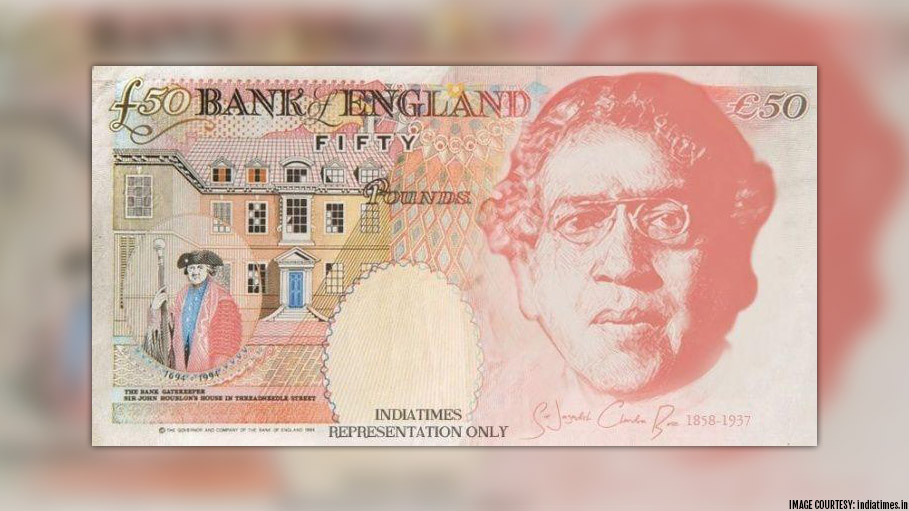 The Bank of England has announced, that it is going to redesign its 50-Pound currency note with a prominent name from the world of science. The name of Indian scientist Sir Jagadish Chandra Bose has been featured in the nomination list, once selected it will go into print from 2020.

At present, the Bank Of England is inviting nominations from people to have a fresh new face on its 50-pound currency note. According to its website the bank has received nearly 175,000 nominations till November 26 and among the list of 114,000 nominations it published, also features Sir Jagadish Chandra Bose's name.

Bose has made an immense contribution to the advancement of wireless communications, which led to the development of modern day radio. One cannot imagine a world today without wires, as without the radio, there would be no wireless communications and to be precise no Wi-Fi or Bluetooth to connect to one’s smartphones and laptops.

Jagadish Chandra Bose never expressed any desire in the commercialization of his invention, telegraphy, though he encouraged others to use his research. In 1896, he met Italian inventor Guglielmo Marconi, who had been developing a radio wave wireless telegraphy system for more than a year and was trying to market his invention to the British postal service. Marconi has acknowledged the significance of Bose’s work in his writing.

He is also credited with proving that animals and plants share much in common as a result of his early experimentations and the creation of a very sophisticated instrument called the Crescograph to detect minute responses of living organisms. He was the first scientist in the world to claim that plant and trees also have life.

After his graduation in physics from Calcutta University, Jagadish Chandra Bose attended Cambridge University, studying natural sciences. He returned to India in 1884 completing his B.Sc. degree from Cambridge University and was appointed Professor of Physical Science at the Presidency College in Kolkata. In 1917, Bose left his job as a professor and established the Bose Institute at Kolkata, which dedicated to the study of plants.

We all know that there is no dearth of British scientists who have contributed a lot to our understanding of the world, but we can certainly hope that Sir Jagadish Chandra Bose’s name will eventually make to the final list and his contribution will be acknowledged with this great honour of getting featured on the new 50 pound currency note.