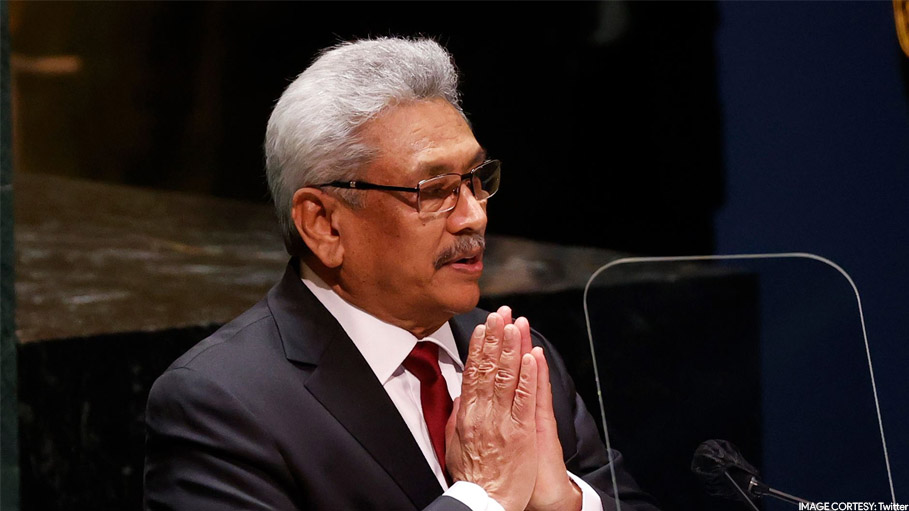 Rajapaksa was festooned with flowers by a welcoming party of ministers and politicians as he disembarked at the main international airport, the official added -- in a sign of his enduring influence in the Indian Ocean nation critics say he led to ruin.

"There was a rush of government politicians to garland him as he came out of the aircraft," the official told AFP.

He sent in his resignation from Singapore before flying on to Thailand, from where he had petitioned his successor Ranil Wickremesinghe to facilitate his return.

The 73-year-old leader arrived from Bangkok via Singapore on a commercial flight, ending his 52-day self-imposed exile.

"He has been living in a Thai hotel as a virtual prisoner and was keen to return," a defence official, who asked not to be named, told AFP.

"We have just created a new security division to protect him after his return," the official added.

"The unit comprises elements from the army and police commandos."

Sri Lanka's constitution guarantees bodyguards, a vehicle and housing for former presidents, including Gotabaya and his elder brother and fellow ex-president Mahinda.

Gotabaya Rajapaksa's resignation ended his presidential immunity, and rights activists said they would press for his arrest on multiple charges, including his alleged role in the 2009 assassination of prominent newspaper editor Lasantha Wickrematunge.

"We welcome his decision to return so that we can bring him to justice for the crimes he has committed," said Tharindu Jayawardhana, a spokesman for the Sri Lanka Young Journalists' Association.

Rajapaksa also faces charges in a court in the US state of California over Wickrematunge's murder and the torture of Tamil prisoners at the end of the island's traumatic civil war in 2009.

Singapore declined to extend Rajapaksa's short-term visa and he travelled to Thailand in August, but authorities in Bangkok instructed him not to step out of his hotel for his own safety.

On Friday police deployed plainclothes officers and armed guards outside a government residence allocated to Rajapaksa in Colombo ahead of his arrival.

Security at his private home was also stepped up, officials said, adding that he was expected to first visit the family residence.

Sri Lanka has endured months of shortages of crucial goods including food, fuel and medicines, along with lengthy electricity blackouts and skyrocketing inflation after running out of foreign currency to finance essential imports.

The coronavirus pandemic dealt a hammer blow to the island's tourism industry and dried up remittances from Sri Lankans working abroad -- both key foreign exchange earners.

Rajapaksa, who was elected in 2019 promising "vistas of prosperity and splendour", saw his popularity nosedive as hardships multiplied for the country's 22 million people.

His government was accused of introducing unsustainable tax cuts that drove up government debt and exacerbated the crisis.

Wickremesinghe was elected by parliament to see out the remainder of Rajapaksa's term. He has since cracked down on street protests and arrested leading activists.

The government defaulted on its $51 billion foreign debt in April and the central bank forecasts a record eight percent GDP contraction this year.

After months of negotiations, the International Monetary Fund agreed on Thursday to a conditional $2.9 billion bailout package to repair Sri Lanka's battered finances.