Sri Lankan authorities issued shoot-on-sight orders on Tuesday to quell unrest that has seen buildings and vehicles set ablaze a day after the island was rocked by deadly violence and rioting. 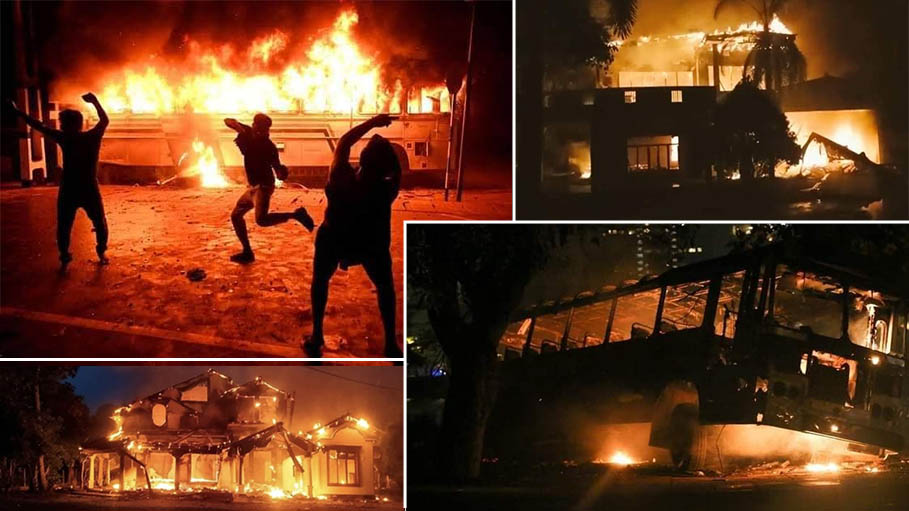 Colombo: Sri Lankan authorities issued shoot-on-sight orders on Tuesday to quell unrest that has seen buildings and vehicles set ablaze a day after the island was rocked by deadly violence and rioting.

With thousands of security forces enforcing a curfew, the defence ministry said troops "have been ordered to shoot on sight anyone looting public property or causing harm to life".

Mobs then retaliated across the country late into the night, torchingSr dozens of homes of ruling-party politicians and trying to storm the prime minister's official residence in the capital.

Protests continued on Tuesday despite the curfew, with some people defying the shoot-on-sight order to torch buildings and vehicles.

A luxury hotel said to belong to a Rajapaksa relative was set on fire on Tuesday evening on the edge of the Sinharaja rainforest.

And police shot into the air at two locations to disperse mobs trying to burn vehicles.

Earlier, a crowd had attacked and set fire to a vehicle carrying Colombo's most senior policeman.

Officers fired warning shots and sent in reinforcements to rescue Senior Deputy Inspector-General Deshabandu Tennakoon, who was rushed to hospital but later released.

In another sign of deteriorating security, vigilante groups blocked the main road to Colombo airport to check for any Rajapaksa loyalists trying to leave the island, witnesses said.

As well as those killed, more than 225 people were injured on Monday, which also saw the resignation of prime minister Mahinda Rajapaksa.

His departure, however, failed to quell public anger, with his brother still president and wielding widespread powers including command over security forces.

Mahinda had to be rescued in a pre-dawn military operation after thousands of angry protesters stormed his official residence overnight and lobbed petrol bombs.

Protester Chamal Polwattage said he expected demonstrations to swell again and vowed they would not leave "until the president goes".

"People are angry about the attacks launched against us yesterday... We have a lot of volunteers bringing food and water for us," the 25-year-old told AFP.

The Rajapaksa clan's hold on power has been shaken by months of blackouts and shortages of essential goods in Sri Lanka's worst economic crisis since independence in 1948.

The pandemic torpedoed vital tourism and forced the government to halt most imports to save foreign currency needed to pay its debts, on which it has now defaulted.

But after weeks of peaceful demonstrations, Monday's attacks on protesters by government supporters represented a turning point.

In the ensuing violence, police fired tear gas and water cannon to disperse crowds and declared a curfew across the entire South Asian nation until Wednesday, but later extended it by another day to Thursday.

Several Rajapaksa homes were torched, while a family museum in their ancestral village was trashed.

Outside Colombo, ruling-party lawmaker Amarakeerthi Athukorala shot two people -- killing one of them -- when surrounded by a crowd of protesters, police said.

The MP later took his own life, officers said, but the ruling party said he had been murdered. The lawmaker's bodyguard was also killed.

Another ruling-party politician who was not named shot dead two protesters and wounded five others in the south, police added.

UN rights chief Michelle Bachelet said Tuesday she was "deeply troubled" by the violence committed both by supporters of the government and the subsequent "mob violence" against ruling party members.

Bachelet in a statement called for an investigation and urged the government to "engage in meaningful dialogue with all parts of society".

The US State Department also reiterated a call for an investigation into the clashes, saying Washington was both concerned with the escalating violence and the deployment of the military.

"We stress that peaceful protesters should never be subjected to violence or intimidation, whether that's on the part of the military force or civilian units," spokesman Ned Price told reporters.

Mahinda Rajapaksa said his resignation was intended to pave the way for a unity government, but it was unclear if the opposition would join any administration led by his brother.

The president has the power to appoint and fire ministers as well as judges, and enjoys immunity from prosecution.

Political sources said attempts were under way to arrange an online meeting between the president and all political parties.

"Unless President Rajapaksa steps down, no one -- whether the masses in the streets or key political stakeholders -- will be appeased," analyst Michael Kugelman from the Wilson Center told AFP.