Sanjay Kapoor, who accompanied his elder brother Boney Kapoor and niece to the event in Singapore, shared the first look of Sridevi’s wax statue on his Instagram handle with an emotional post, “She lives in our hearts forever”. 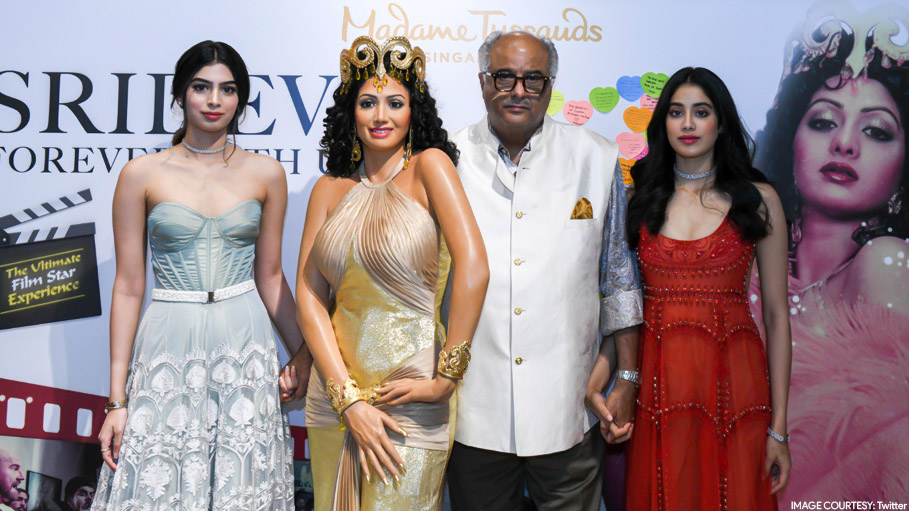 Legendary Bollywood actress Sridevi was honored with a wax figure of her at the Madame Tussauds Singapore, which was unveiled by both her daughters Janhvi and Khushi along with her filmmaker husband Boney Kapoor on Wednesday.

Sanjay Kapoor, who accompanied his elder brother Boney Kapoor and niece to the event in Singapore, shared the first look of Sridevi’s wax statue on his Instagram handle with an emotional post, “She lives in our hearts forever”.

At the unveiling event, Sridevi’s daughter and actress Janhvi Kapoor was looking magnificent in a red floor-sweeping gown, who also looked very emotional while unveiling her late mother’s wax statue while her younger sister Khushi, also looking stunning in a grey ensemble, too appeared to be missing the presence of her Mother.

Seeing, Janhvi along with Khushi posing emotionally with Sridevi’s wax double along with their father, made an ideal family portrait, which made fans on the Internet emotionally and fondly remembering the actress in the comments section of the Instagram handle.

The wax statue of Sridevi also holds a special value for the fans of Sridevi, as the statue is inspired by Sridevi’s most stunning Hawa Hawai avatar from her 1987 Bollywood blockbuster film Mr. India.

On Sridevi’s birth anniversary this year Madame Tussauds Singapore had made the big announcement of having her statue at the museum, sharing glimpses of the statue with this note, “As a tribute to the Bollywood icon, we are pleased to announce that we will be launching her wax figure in early September this year! Her figure is one of its kind in the world, and it’s an exclusive addition to Madame Tussauds Singapore!”.

At this, Sridevi’s husband and filmmaker Boney Kapoor shared an extremely emotional message announcing the unveiling on his tweeter handle, “Sridevi lives forever in not just our hearts but also in the hearts of millions of her fans. Eagerly waiting to watch the unveiling of her figure at Madam Tussauds, Singapore on September 4, 2019. #SrideviLivesForever”.