Sridevi songs have been Bollywood chartbusters through the years. Here goes a tribute to the beautiful actress through revisiting her most popular songs that are your all time favorites. 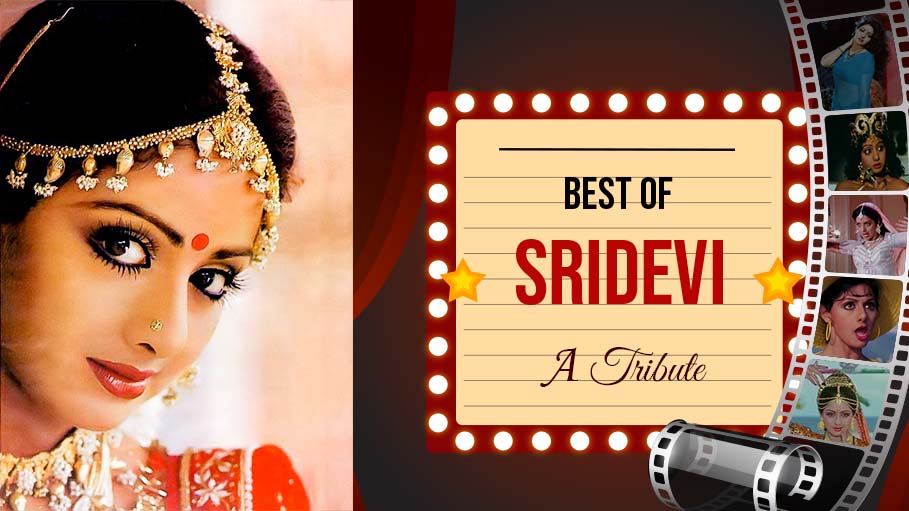 Sridevi songs have been Bollywood chartbusters through the years. Kids and youngsters who were growing in the 80s and 90s era have shaken legs countless times to this legendary Bollywood actress’s songs. The sudden death of Sridevi marks a great loss to the Indian film industry. Here goes a tribute to the beautiful actress through revisiting her most popular songs that are your all time favorites.

Starring veteran actor Kamal Haasan and Sridevi, the film revolves around an urban young lady who suffers from a memory loss. A complete de-glam avatar of Sridevi. The song, voiced by Suresh Wadkar is still considered one of the best compositions in Indian cinema.

A typical bollywood masala movie and a complete contrasting character from Sadma, Sridevi plays a spoilt young woman who accidentally falls in love with a man who seeks revenge from Sridevi’s reel father. The song with a vibrant picturization is considered one of the all time hits of Bollywood, co-starring Jitendra.

Straight from the Indian myths and puranas, rises the Nagina (female serpent), who in the film is termed as ‘Icchadhari Nagin’ (who can take a human form on her wish). Starring opposite bulgy Rishi Kapoor, Sridevi, the Nagina, romances, dances, fights and does a lot of stuff that are far from reality. Result? A blockbuster Bolly hit! But, I must admit she looks quite sexy in her serpent avatar and while doing the snake dance.

Husband Boney Kapoor produced, and brother-in-law Anil Kapoor co-starring film Mr. India is definitely a milestone in mainstream Indian film. Directed by Shekhar Kapoor, Sridevi plays a passionate journalist who performs this sizzling item number inside the den of bad guys, with a mission to uncover them. A chart breaker, a blockbuster, an all time favorite of mine!

The film surely deserves another mention for this smoking hot song where you find Sridevi in semi-transparent chiffon saree romancing the male lead of the film, who can go invisible with the help of a magical watch. Woooooooo!

How many of you remember desiring Sridevi in the yellow, blue chiffon sarees, lose hair and matching bangles in wrist? Well, I’m talking about the Yash Chopra made Chandni, starring fat and old Rishi Kapoor opposite the legendary Bollywood actress. The song was and is so hit, it’s still performed in several stage shows, mehendi functions and more.

Beautiful Sridevi dancing in the rain. I mean, what else could you ask for? An out-and-out Bollywood drama where Sridevi plays double roll of twin sisters. One submissive, homely, and another, a tom boy, daring. The film was a remake of 1972 biggie Seeta Aur Geeta and surprisingly, its lead, retro beauty Hema Malini, is also a Tamilian by birth. Yeah, you got it right, Sridevi was a Tamilian!

The on screen chemistry between Anil Kapoor and Sridevi was praised and appreciated repeatedly. Therefore film like Lamhe happened and here’s another Sridevi’s dance number for you.

Here Sridevi plays a middle-class wife who actually ‘sells’ his husband to some other woman for a lot of money! Like, are you kidding me gal? No! The film had been a boxoffice topper co-starring Anil Kapoor and another 90s hottie Urmila Matondkar. And the song went extremely popular.

Sridevi makes a comeback with this very very good and a sensible film portraying a regular housewife and a doting mother, who is somehow ignored for her poor English speaking skills. A relevant issue that connected the entire India and made us move to this peppy Marathi number.

So, this was my way of paying a tribute to this legendary Bollywood actress. What’s your all time favorite Sridevi song? Do share with me.