Truth is stranger than fiction -- And there is one place where you will surely find strange things and that is Australia. 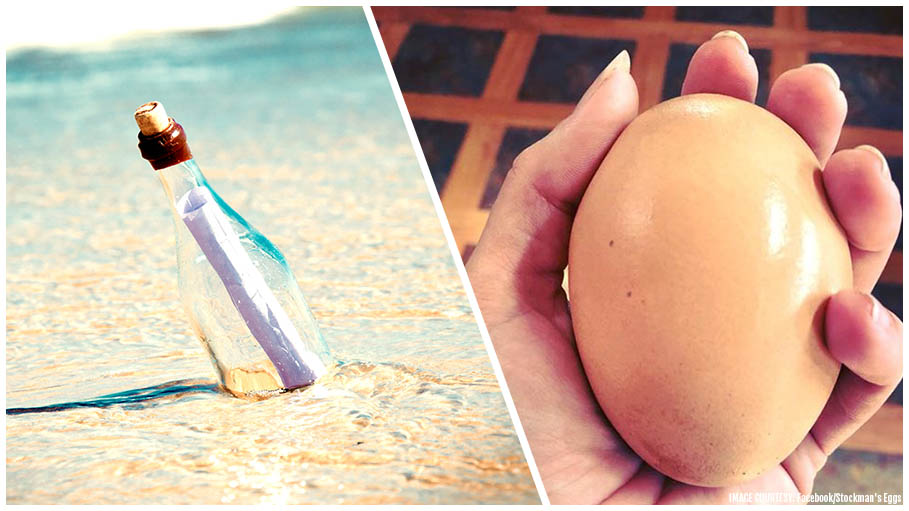 Truth is stranger than fiction-- And there is one place where you will surely find strange things and that is Australia. It is reported that a hen laid a mega egg weighing 176g and when it was cracked open, guess what came out of it… Well, another egg! There was an egg within an egg. An image of the mega-egg was posted by Stockman's Eggs in Queensland, Australia.

An egg within an egg is unheard of. When consulted,  associate Professor Raf Freire from Charles Sturt University's veterinary sciences school said he is unsure of how the double egg had been formed.  However, he did put forward that sometimes it is usual for hens to retain eggs when they are stressed. These eggs, however, drop out the following day.

He felt that a second ovum was released which formed around the first one.

"Biologically I'm struggling to understand why that smaller egg never dropped out, it's very odd," he told

MESSAGE IN A BOTTLE FOUND AFTER 132 YEARS

There are many who send messages in bottles but rarely one finds the bottle. Strangely one such bottle with a message was found on Wedge Island in Western Australia on Jan 21.

The bottle with the message intact in it is 132 years old. The oldest message in the bottle was found after 108 years in Germany in 2005  and this discovery has broken the earlier record.

The gin bottle was tossed in the Indian Ocean from the German ship Paula as part of an oceanographic experiment. This was done to understand ocean currents in a better manner and hence find better shipping routes.

Tonya Illman discovered the bottle half-buried as she was walking with a friend along the shore. Tonya Illman said her son’s girlfriend found the note in the bottle when she went to remove all the sand from it. The note was rolled and tied with a string. When the note was damp when it was taken out. They dried the note as soon as they got home. When they opened it , they saw that it was written in German in a printed form and it was very faint.

Tonya and her husband Kym have loaned the bottle to the Western Australian Museum, and a report has been published by them. The Illmans have also made a video about their discovery.

Researchers believe the bottle washed up the seashore and was hidden in the sand within a year of being thrown. A storm probably helped to remove the sand and make the bottle visible a century later.

One may wonder what was in the note. Well, the note has asked the finder to send back the slip to the owners-the German Naval Observatory or the nearest German consulate and to mention the date it was discovered and the place it was found.

Researchers have found a record which states that the note was thrown as part of an experiment. It was thrown off the ship Paula by the captain.

So with the discovery of the note one long experiment has come to an end.