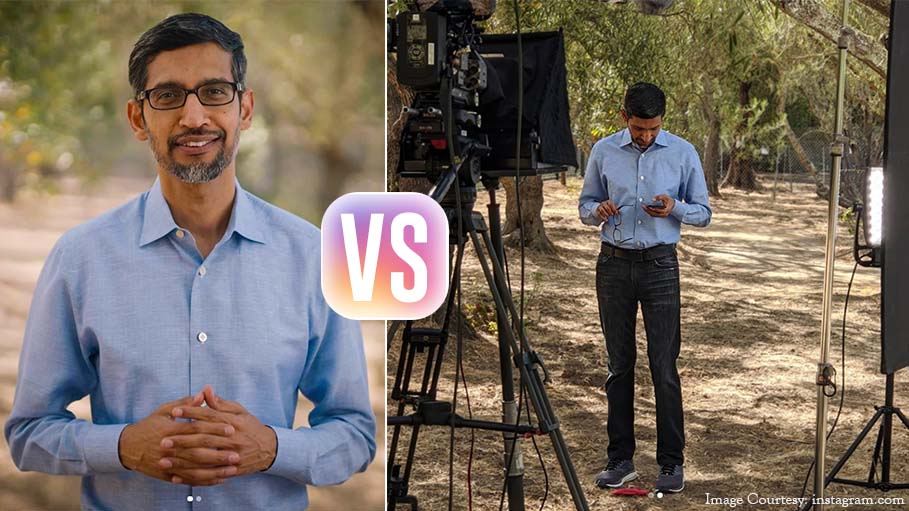 The two clicks appear different and each tells a different story.

In the first image you can catch the Google CEO adorning a formal blue shirt while smiling calmly at the camera.

Check out the snapshot below: The second click depicts what went on behind the scenes. He captioned it, “IG vs. reality... comfy shoes + checking on @fcbarcelona scores between takes.”

As the caption says it all, he can be seen wearing comfortable shoes, engaged on his phone, checking out the FC Barcelona scores. Compared to the first shot, he’s more relaxed in the second. This goes to reaffirm that pictures can be pretty deceiving and there’s always more than what meets the eye.

One user commented, “Haha! Stepping up the insta game,” while another wrote, “Behind the scene story.” The football club also commented, “Proud to have you in our team.” The above snapshots were taken while the CEO was busy shooting for a video.

On Monday while speaking at the sixth edition for Google for India, he announced that his company will be investing around $10 billion for funding the digital innovation in the country for the next five to seven years.

He also announced an additional investment of $1 million towards Kaivalya Education Foundation to train 700,000 teachers on online education to impart knowledge to children belonging to low income communities.