Syria Crisis- Civilians Victims in a War between Government and Rebels

The recent attack which Syrian government and its allies has initiated on eastern Ghouta district with air raids and artillery in order free it from the rebels, has resulted in killing of more than 500 civilians 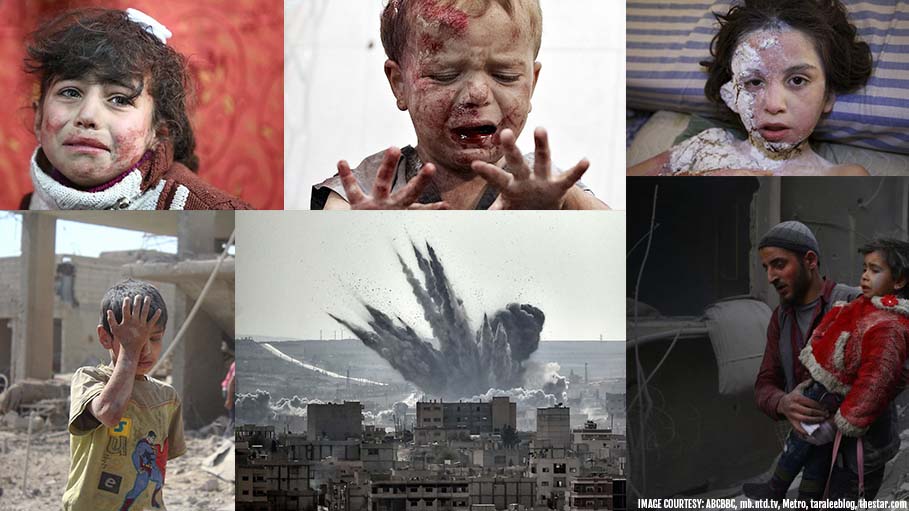 Syria is under seize for more than 7 years. The stability of the country has become a tug of war between the government headed by Bashar al-Assad and rebels, to be precise, the ISIS. The recent attack which Syrian government and its allies has initiated on eastern Ghouta district with air raids and artillery in order free it from the rebels, has resulted in killing of more than 500 civilians and nearly 400,000 civilians trapped.

Now let us understand, what is going on in the Ghouta district. The eastern district of Syria has been under attack by the Syrian government since 2013. It is one of the last rebel stronghold near the capital. Now after this weeks attack, ground forces have been deployed in an effort to remove the rebels who have controlled the enclave for five years.

Eastern Ghouta is 10km east of Damascus, Capital of Syria. As it is so close to the capital it is important for the Syria government to reclaim the area from the rebels. The district, which measures in 104 square kilometer in area, is a home for 400,000 people, half of the population are children under the age of 18.

On February 19, Syrian forces backed by Russian warplanes escalated the offensive on Eastern Ghouta with a relentless using mortar shells, barrel bombs, cluster bombs, and bunker-busting munitions that killed hundreds of people mostly the civilian. It is regarded as one of the deadliest bombing campaigns by the regime of Bashar al-Assad and his allies during the seven-year war.

Amnesty International has described the bombing to war crimes, which has destroyed six hospitals and medical centres across the district. The attacks has led to the crisis situation, chronic food and medicine shortages leading to severe cases of malnutrition.

The attack also raised the issue of chemical or gas attacks. Health workers in Syria say a child has died and more than 10 people are given treatment after a suspected chlorine gas attack. Though the Syrian government has denied using chemical weapons in the war. Russian Foreign Minister Sergey Lavrov also described allegations of gas use as "bogus stories".

561 civilians have been killed in Eastern Ghouta, according to the death toll compiled by the Syrian Observatory for Human Rights. 185 children and 109 women were killed in the past three months, according to Anadolu's news agency reports.

According to Syrian government officials the reason behind the large number of casualties is because the rebels are using civilians as human shields, as bombing raids have killed more civilians in the besieged enclave of eastern Ghouta.

Doctors and medical activists from around the world has called for an end to the violence for the protection of the civilians in a joint appeal published in the Lancet. The group represented medical centers from Harvard to Britain’s Royal Free hospital etc.

The UN Security Council failed to agree on a proposed 30-day ceasefire across Syria, to allow for emergency humanitarian deliveries and medical evacuations, because of Russian objections on 23rd February 2018. But after two days with situation little secure and convincing Russia, the UN Security Council has been successful in passing a resolution in favour of a 30-day ceasefire "without delay".

Even after the UN Security Council called for a ceasefire, the attacks continued killing at least 23 people on 26th February 2018.

The UN headquarters in New York is busy with discussion over Syrian attacks followed by a direct appeal by French and German leaders to Vladimir Putin for Russia to support a ceasefire. Meanwhile Kuwait and Sweden who initially supported the resolution for ceasefire later dropped the resolution and supported Russia at the last moment. Meanwhile relentless attitude of Moscow in supporting the Syrian government has attracted strong condemnation by the UN secretary general, António Guterres, describing the situation in Ghouta as “hell on earth”.

In a bid to put pressure on Russia, United States has told Russia to use its influence to secure a full-fledged ceasefire in Syria's rebel-held enclave of eastern Ghouta. US State Department spokeswoman Heather Nauert called for an “immediate end to offensive operations” in the region to allow aid workers to treat the wounded.

Altogether the whole episode of diplomatic communication established the primacy of Russia in Syrian affairs and the UN’s failure in imposing ceasefire.

In March, the civil war in Syria will enter its 8th year, with more than 465,000 Syrians killed and over 12 million displaced from their homes.