Among the newly wedded couples, were social worker Huang Mei-yu and her partner You Ya-ting. They have been living together after a religious blessing in 2012 but they were waiting for the same legal rights granted to the heterosexuals. 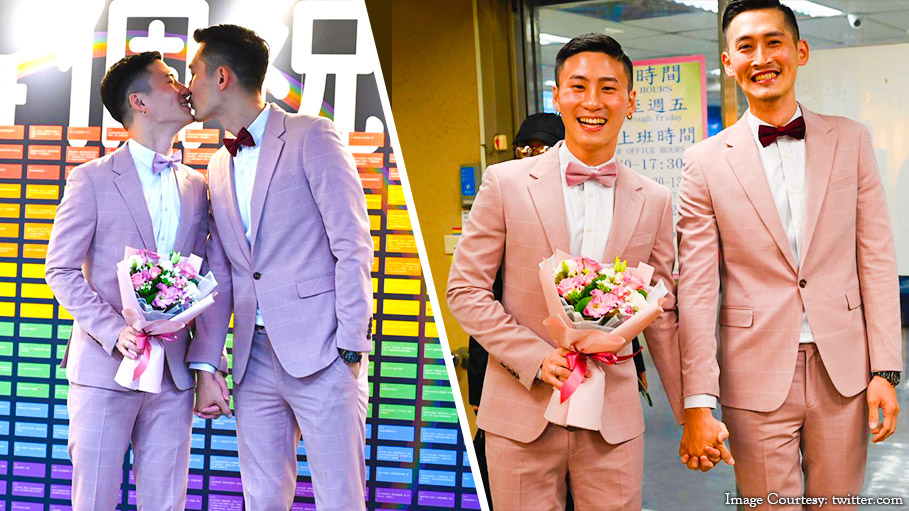 This Friday Taiwan made history when it became the first Asian country to arrange legal gay marriage as same-sex couples tied the knot amidst celebrations and emotional scenes, that culminated after three decades of fight for equality in the country.

The special weddings came after a week, when the lawmakers of the country took the unprecedented decision to legalize gay marriage despite staunch criticism from the conservative opposition. Thus placing Taiwan at the centre of burgeoning gay rights movement in Asia.

On Friday, a dozen couples arrived at a government office in downtown Taipei to register their relationships as marriages. They then embraced and kissed each other in front of the public and the press, proudly holding aloft their wedding certificates as well as new identity cards listing themselves as spouses.

Among the newly wedded couples, were social worker Huang Mei-yu and her partner You Ya-ting. They have been living together after a religious blessing in 2012 but they were waiting for the same legal rights granted to the heterosexuals.

After the signing of her marriage certificate, Huang said, “It’s belated, but I’m still happy we can officially get married in this lifetime. Now that same-sex marriage is legally recognised, I think my parents might finally feel that it’s real and stop trying to talk me into getting married (to a man)”.

She said, it is the legal recognition of their love and a crucial step, which may help others to accept their relationship.

Taiwan’s veteran gay rights activist Chi Chia-wei welcomed the move and said the marriage registrations is the culmination of a three-decade-long struggle to persuade successive governments to change the law in the country. Chi said, “I feel very happy that same-sex couples can finally register and be listed as each other’s spouse. I am honored to witness Friday’s marriage registrations”.

It was Chi who took the first initiative to submit a petition in Taiwan’s Constitutional Court in 2017, but unfortunately, the judgment denied same-sex couples the right to marry and was declared unconstitutional.

The parliament finally passed a bill last Friday after several court deadlines, thus allowing same-sex couples to form ‘exclusive permanent unions’ and another clause that would let them apply for a ‘marriage registration’ with government agencies.

Last week, Taiwan made history when it became the first country in Asia to legalize gay marriage. But the issue has polarised the society causing deep divisions on the island country that is strictly conservative, especially outside the cities and among the older generation.